“My constituents want written confirmation of any limitation” 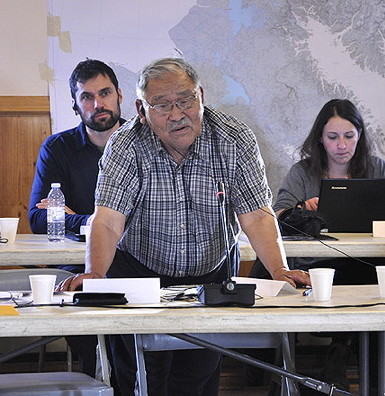 Moratorium? Where does it say that?

Two members of Nunavut’s legislature rose in the house this week to ask about the New Year’s Day interim ban on caribou hunting on Baffin island, and to get details about what’s going to happen next.

One even questioned whether the ban was in place at all, since he’d never seen written confirmation of the government decree.

The legislature’s newest member, Pauloosie Keyootak of Uqqummiut, said “confusion has reigned,” among his constituents and he asked Environment Minister Johnny Mike outright whether the moratorium had begun.

Mike confirmed that the moratorium had been in place since Jan. 1, 2015.

“Has the department provided a written announcement to all communities of this moratorium?” Keyootak asked during question period in the Nunavut legislature Feb. 25.

“Of particular significance is the fact that our community doesn’t have a wildlife officer presently and with no written confirmation and only radio announcements, some hunters don’t believe that a moratorium is in effect, quite a number of them.”

Although Inuit used to live by the oral tradition, more and more young people rely on the written word, he added.

“My constituents want written confirmation of any limitation, especially a moratorium on harvesting laid out in writing, outlining the rules Inuit have to follow,” Keyootak said.

Mike said he held a teleconference with Baffin MLAs when the ban came into effect but there was no member for Uqqummiut at the time.

The former member for that riding, Sam Nuqingaq, was kicked out of the legislature in October 2014 and there was no official representation until the Feb. 9 byelection.

But, Mike added, the Qikiqtaaluk Wildlife Board and local hunters and trappers organizations were informed all along about what was happening with regard to dwindling caribou numbers and the need for drastic measures.

“With respect to correspondence not reaching his community, or if one was sent,” Mike added, “it is something I will have to look into.”

Aerial surveys within the last few years, combined with Inuit knowledge, have confirmed that the caribou herds on Baffin Island have reached dangerously low numbers.

Experts suggest there are fewer than 5,000 caribou on Baffin, a 95 per cent reduction from a population of about 150,000 estimated during the 1980s.

Of those current numbers, officials suggest there are only a few hundred left in north Baffin.

As a stop-gap measure, while they draft a formal caribou management plan, the Nunavut government issued a harvesting ban for the entire island, until further notice.

Quttiktuq MLA Isaac Shooyook, a traditional hunter, often plays the role of observer when the assembly is in session but he used both his member’s statement and question period Feb. 25 to talk about Baffin caribou.

He asked Mike when the Baffin caribou management plan will be drafted and how long it will take to complete.

Referring to him as the “esteemed elder,” Mike first thanked him for the question.

“Currently, the Nunavut Wildlife Management Board has proposed a public hearing for the Baffin region regarding caribou management,” Mike said.

The board announced last month that the meeting would take place in Iqaluit from March 11 to March 13.

“After the public hearing process has played out, I will be provided with a list of recommendations from various wildlife organizations and at that time, we will be deliberating on these issues. That’s all I can say at this time.”

Shooyook pressed on, asking for timeline details. “Will it extend to the spring? Will it extend to a couple of years?” he asked. “Will you speak to that after the management process has been played out?”

Mike said it’s too early to tell but added that the process of drafting a caribou management plan itself will take “a couple of months.”

“It doesn’t stop any Inuk from going to the Kivalliq region or near Repulse Bay. They have that freedom to go hunting caribou in those regions,” said Mike.

“I know for a fact that people from Igloolik and Hall Beach have quite a few frostbites on their cheeks, probably because they have gone long distances to go caribou hunting.”

Mike added that before the moratorium was enacted, the GN considered allowing local hunting and trappers organizations to come up with their own plan to manage the hunt locally.

“There was never any movement to the HTOs managing their local hunters. It raised a lot of local concerns,” Mike said.

“I have also heard on the local radio that the government just wants to control everything. That wasn’t our position, but that end decision was not made lightly… At this time, I have yet to hear of any HTO grabbing that mandate to handle their local hunters.”