Elections Nunavut to hold plebiscite in 2016 on municipal land sales 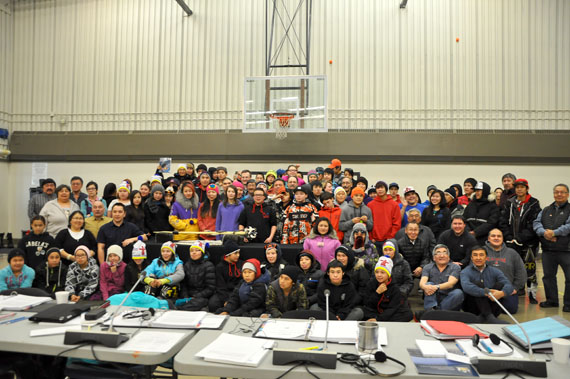 Nunavut MLAs have emerged from a four-day full caucus retreat in Kugluktuk with a big to-do list that includes fixed election dates, a code of conduct and a territorial-wide plebiscite on the sale and ownership of municipal lands.

Their new mandate statement, called Sivumut Abluqta: Stepping Forward Together, will become public next month, during a sitting that’s set to start March 6.

It replaces Tamapta, the mandate statement adopted by the third legislative assembly after the 2008 territorial election.

Nunavut Premier Peter Taptuna said in a news release that MLAs wanted to focus on “clearly-defined, realistic and achievable goals.”

“Sivumut Abluqta: Stepping Forward Together will form the foundation of our mandate and the basis on which Nunavummiut will measure our success as their elected representatives,” Taptuna said.

To that end, MLAs agreed on the following specific projects:

• a mid-term leadership review in the fall of 2015, with a broadened approach that will include issues such as the size of cabinet, the standing committee structure, and the status of the government’s progress in meeting its priorities;

• the adoption of a code of conduct for MLAs to “establish clear expectations for members in relation to their public behaviour in the execution of their duties;”

• a territory-wide plebiscite in 2016, under Article 14.8.4 of the Nunavut Land Claims Agreement, to decide if municipalities may allow fee simple land ownership of municipal lands — the last such plebiscite was held in 1995; and

• self-reliance and optimism through education and training;

• economic growth through responsible development across all sectors; and

• good government through wise use of resources.

The throne speech and release of the mandate statement will occur after MLAs finish looking at the Government of Nunavut’s 2014-15 capital estimates.

That’s the section of the budget that provides for capital projects, such as buildings and infrastructure.

The full budget for 2014-15 — covering operations and maintenance — will be introduced later, in the spring session, which will likely start around May 22.

“Our government’s next budget and set of departmental and territorial corporation business plans, which will be introduced in the spring sitting of the house, will focus on identifying, in detail, the resources necessary to achieving the priorities that are articulated in Sivumut Abluqta: Stepping Forward Together,” Finance Minister Keith Peterson said in the news release.