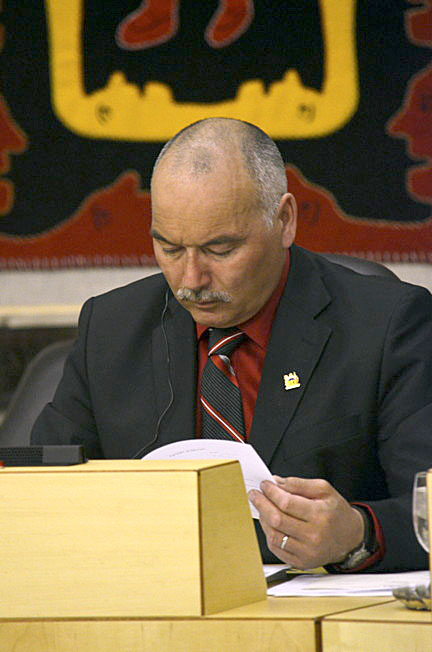 MLA for Arviat South Joe Savikataaq sits at the legislative assembly May 28, when he asked Premier Peter Taptuna about bonus pay deputy ministers and Crown corporation heads received over the past three fiscal years. (PHOTO BY DAVID MURPHY)

Arviat South MLA Joe Savikataaq wants more transparency around how and why deputy ministers, and the heads of Crown corporations, get paid in performance bonuses.

At the Nunavut legislature in Iqaluit May 28, Savikataaq asked Premier Peter Taptuna about a recently tabled document that outlines how much the government workers received in bonus and merit payments.

In it, Savikataaq pointed out the Government of Nunavut paid out just over $300,000 in bonuses to the government workers in the 2012-13 fiscal year.

In the past three fiscal years, deputy ministers and heads of Crown corporations received a total of $935,991 in bonuses.

“Nunavummiut need to have confidence that spending of this nature is justified,” Savikataaq said during question period. He asked the premier if there’s a methodology to the payments.

Taptuna said there is a methodology, based on pay scale.

“There is a limit to the bonus and merit pay,” Taptuna said.

Taptuna said the compensations help retain and attract government workers, and that the GN has no plans to change the method at this time.

“We’re at competition with the rest of the nation,” Taptuna said. “It’s very difficult to compete with bigger jurisdictions like [the Northwest Territories], Yukon and the provinces.”

The tabled document only surfaced after Tununiq MLA Joe Enook submitted a written question to the Nunavut legislature March 10 about who received bonuses, and how much.

Savikataaq said this type of document should be readily available and public information. It’s tabled in other jurisdictions on an annual basis — so why not Nunavut?

“These are public funds. And to be open and transparent, I can’t see why we should not be able to do that with our deputy heads and our senior personnel,” Taptuna said.

Speaking with media after question period, Savikataaq said he was “satisfied” with Taptuna’s answer.

“I just wanted to know how it was calculated because the results were given out but there was no way of figuring out why they got the amount they got,” Savikataaq said. “Like, it’s not consistent across the board.”