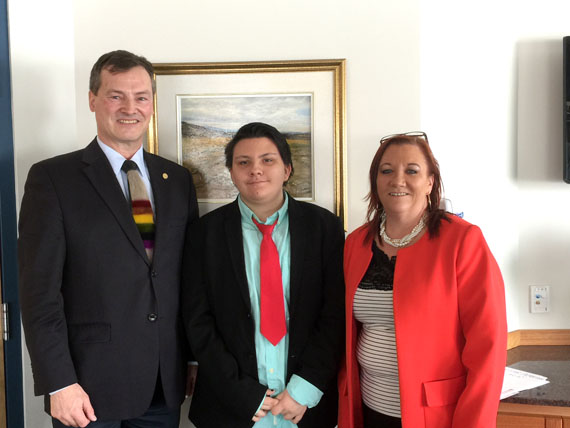 Nunavut joined a growing club of Canadian jurisdictions that protect transgendered people from discrimination March 13, following a unanimous vote by Nunavut MLAs on third and final reading of a bill to amend Nunavut’s Human Rights Act.

“This is a tremendous day for people who are transgender in Nunavut,” Justice Minister Keith Peterson said prior to the amendment’s passage

Iqaluit residents Catherine Lightfoot and her 17-year-old son, Kieran Drachenberg, two vocal supporters of the legislation, were invited by Peterson to sit behind Nunavut Premier Peter Taptuna as the bill passed the house.

The pair held hands while Speaker George Qulaut asked if any MLAs oppose the bill.

Hearing none, the rest was history—and Lightfoot said her family was “thrilled to be a part of it.”

“It was a really amazing moment to be honest,” she told Nunatsiaq News March 14.

Right now, nine provinces and one territory list gender identity or expression within their human rights laws as grounds for discrimination.

Bill C-16, a federal amendment enshrining legal and human rights protecting gender expression, is currently under consideration at the House of Commons in Ottawa.

“To come in this short a period of time and be ahead of the Government of Canada is huge for where this territory is moving as far as I’m concerned,” Lightfoot said.

Peterson told fellow MLAs that enshrining gender identity into the territory’s Human Rights Act—which was passed in 2003—is in keeping with the spirit of act.

“[The act] will make clear that Nunavummiut who are transgender have the same right to live a full and productive life as anyone else in the territory, free of discrimination,” he said.

Nunavut and British Columbia are the only jurisdictions in Canada that rely on tribunals to uphold human rights.

The Nunavut Human Rights Tribunal has already dealt with at least one case related to transgender rights.

In 2012, the Government of Nunavut abruptly cut funding for Vanida Plamondon, a transgendered woman from Kugluktuk, during her relocation to Edmonton for a sex change.

The abrupt cessation of coverage left Plamondon stranded with no way to return home to Kugluktuk from Alberta.

Lightfoot said she hopes the transgender amendment will offer further protection for Nunavummiut so they don’t experience similar hardship.

“In the past the Government of Nunavut was not helping, was not covering those surgeries, so I don’t know where they’re at with that,” she said.

But just having the words included in the legislation will help open peoples minds to the challenges some families are forced to go through.

“As a parent we all want to make sure that our kids are safe and we’re looking out for their well-being,” Lightfoot said.

“Without these kinds of bills, parents of children in the LGBTQ community… didn’t have the luxury of knowing that our kids were going to be safe and protected by law.”

An accomplished writer despite his young age, Drachenberg wrote a blog entry for the Arctic Children and Youth Foundation about his own experiences identifying as transgendered in Nunavut.

“To pass this bill to include gender identity in the Nunavut Human Rights Act is a long overdue step forward in improving and catching up to the other provinces and territories of Canada,” Drachenberg said.

“It shows that the people in our government are willing to do what is best for its people, regardless of how they identify gender-wise. It makes me feel safer, more protected and more like a proper citizen of Nunavut. It also makes me prouder to be one.”