Baby Michael was born quickly but safely on Feb. 12 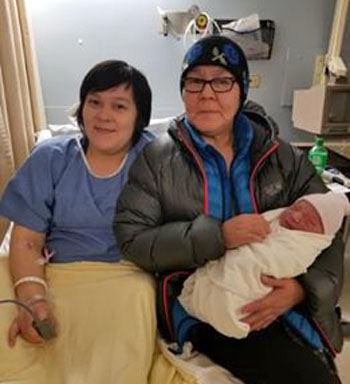 Angela Okalik, left, is pictured with her aunt Susie Aupilardjuk, who delivered her son Michael in the bathroom of her Winnipeg hotel room Feb. 12. (PHOTO COURTESY OF S. TEENAK)

By all accounts, Angela Okalik was well-prepared to give birth.

The mom from Whale Cove arrived in Winnipeg late January ahead of her Feb. 19 due date, when she was expecting her third child.

She travelled from the Kivalliq to Winnipeg with the support of an escort, her aunt Simona Teenak, while her partner stayed at home with their two children.

But baby number three decided to come a week early, and much faster than Okalik expected.

The 27-year-old woman was inside her hotel room at the Canad Inn in Winnipeg on Monday, Feb. 12 with two of her aunts—Teenak, and Susie Aupilardjuk, who was in Winnipeg escorting another relative.

At around 2 p.m., Okalik said she felt labour pains begin. Like most expectant mothers, she paced the room to gauge if the contractions were real or not.

“I was just walking around the hotel room, when it started going really fast,” she said.

Before any of the women could call an ambulance, Okalik was already pushing. “There was no more time,” she said.

She moved into the bathroom, where Aupilardjuk delivered the baby boy less than two hours after Okalik’s first sign of labour.

Okalik said the moment her son was born was a blur, except she remembered he cried and she knew he was healthy. Baby Michael Jr. Angutituar—named after his adoptive father, Okalik’s brother Michael—weighed seven and a half pounds.

Okalik’s aunts then called an ambulance, which came to take the mother and baby to Saint Boniface Hospital, about a 10-minute drive away, where Nunatsiaq News spoke to her Feb. 13.

Okalik was scheduled to be discharged from that hospital that same evening, though she doesn’t yet have a flight scheduled home to Nunavut.

Though her birth experience turned out to be a positive one, Okalik said she’d rather deliver any future babies closer to home.

She delivered her first two children with a midwife in Rankin Inlet, but she was unable to schedule prenatal care in the region for this pregnancy.

Though most Nunavut women have to travel outside their home communities to give birth, Okalik said she’d never heard of anyone who’d given birth outside a health centre—let alone in a bathroom.

She credited her aunt Susie’s calm demeanour and quick thinking for the successful delivery. “She did OK,” Okalik laughed.