“We all have broken hearts” 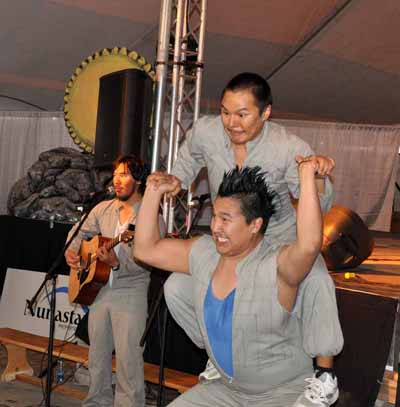 Joey Ammaq balances a fellow Artcirq performer on his shoulders during a performance at the 2011 Alianait festival in Iqaluit. Ammaq died Dec. 1. (PHOTO BY SARAH ROGERS) 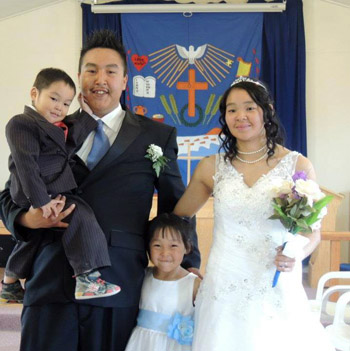 Joey Ammaq with his bride Jenny and two children. (COURTESY OF THE AMMAQ FAMILY)

Just days after the people of Igloolik relived the painful 2012 death of a young local man, the Baffin community has lost another young artist and performer.

RCMP and Nunavut’s coroner are still investigating the death of the 25-year-old. As of Dec. 3, that investigation was continuing.

It’s unclear what exactly happened. Police were called to deal with a “disturbance” in the early hours of Dec. 1. Ammaq was discovered in a local residence without vital signs, and pronounced dead later at the local health centre.

What is clear: Ammaq’s network of family and friends, which stretches across the globe, are left in grief and disbelief.

Ammaq’s Facebook page was flooded with messages this week, many from the arts community in Nunavut and beyond.

With his trademark spiked hair and childlike grin, Ammaq had become a fixture in Nunavut’s arts circuit over the years, travelling extensively with the Igloolik-based Artcirq and his own band Kikkukia.

Alianait director Heather Daley remembers the first time Ammaq performed with Artcirq at the Iqaluit festival in 2007. He brought along his partner Jenny, and his son, who was just a baby at the time.

Ammaq and Jenny, who recently married, and their two children, grew to become regular performers with Artcirq, at Alianait and festivals across the country.

“Joey’s always been there,” Daley said. “And his children grew up with the circus. He always put his family first.”

“He was just the most joyful, gentle soul,” Daley said. “We all have broken hearts.”

Igloolik’s Artcirq mourns the loss of a second young performer in that many years; 26-year-old Solomon Uyasaruk — a friend of Ammaq’s — died in September 2012 while in RCMP custody. An inquest into his death just wrapped up in Igloolik, concluding the cause of his death was “undetermined.”

In a Dec. 3 message to Nunatsiaq News, Ammaq’s mother, Raigili Ammaq, said the reality of her son’s death is only beginning to sink in.

He didn’t deserve to die the way he did, she said.

“We taught him right from wrong when he was growing up,” she wrote. “We also taught him to treat people equally and he was friends with everybody.”

Ammaq’s mother said she and her husband always supported their son as a musician, buying him his first guitar.

But she said Joey was motivated; he got a summer job as a teen and bought his own drum set.

She said she’s touched to see the response to his death.

“We miss him dearly and we thank everyone for the support,” she wrote.

Joey Ammaq leaves behind his parents, Raigili and Tony, three sisters and a brother, his wife Jenny and his two children, Wesley and Brianna. 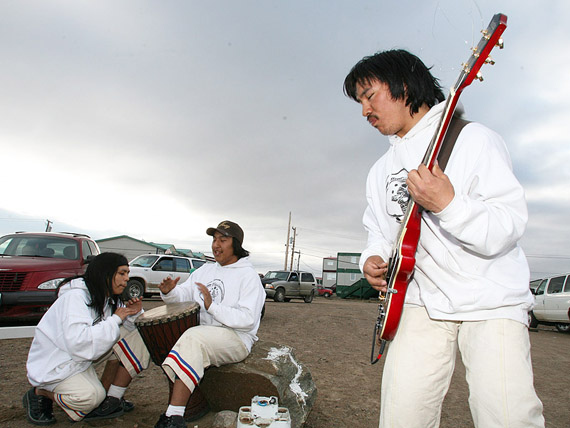 The late Artcirq peformers Solomon Uyasaruk and Joey Ammaq, at left, play a bongo at the 2007 Alianait festival in Iqaluit. (ARTCIRQ PHOTO)