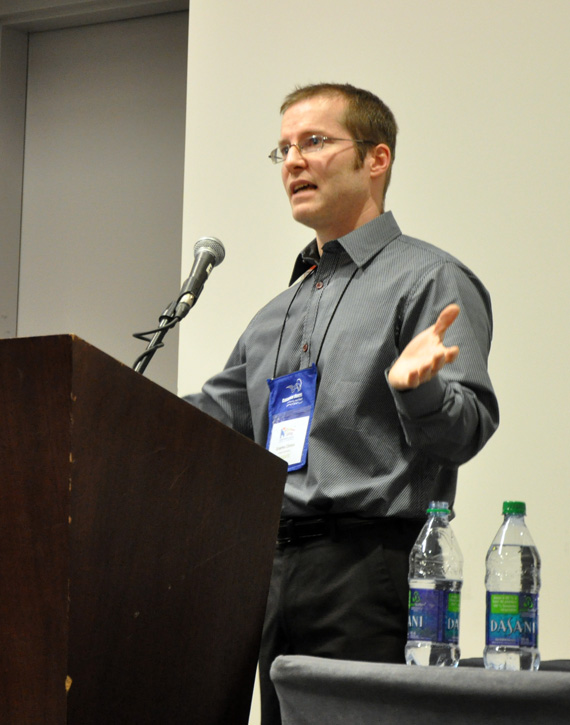 Graeme Clinton, the author of the 2013 Nunavut Economic Outlook, speaks to the Northern Lights business and cultural showcase Jan. 30. (PHOTO BY SARAH ROGERS)

But the territory has much work to do before that growth is turned into prosperity for average Nunavummiut.

That’s according to Graeme Clinton, author of the 2013 Nunavut economic outlook, who presented his findings at the Northern Lights business and culture showcase in Ottawa Jan. 30.

“Nunavut has had a lot of success in its economic growth and there’s a lot of potential, but we don’t have any real mechanism to deliver that success to all Nunavummiut,” Clinton said.

“You could easily create a scenario where all those mines open up. Should the Mary River (project) proceed, that’s 2,000 to 4,000 jobs during construction,” he said. “It offers some opportunity.”

With about 2,000 unemployed Nunavummiut, that’s two jobs for each jobless resident, but, Clinton acknowledges, it’s not that simple.

Mining projects play a vital role to the territory’s economic health, but as with other resource development, the industry is entirely dependent on the cost of minerals.

“The price of gold has not recovered and it’s had implications on Nunavut’s future economy,” Clinton said. “It’s already threatened the future of Meadowbank and Nunavummiut jobs.”

Besides that, Nunavummiut lack the training to fill skilled jobs, while the fly-in, fly-out model for most mining projects limits access for many.

Still, Clinton says, there are jobs to be had in the territory, and many Nunavummiut are doing well.

“There are more Nunavummiut in full-time jobs now than there has ever been before,” he said. “There’s a rising middle class — there’s a success story here.”

Much of Nunavut’s wealth is found in Iqaluit, and Clinton warns that the territory’s income gap continues to grow.

“We’ve got to get Nunavummiut participating in the economy, it’s simple,” he said. “But when you start to dig down into it, you start to understand the complexity of it.”

For one, there are just not enough working people to support the children and people who are in school, Clinton said.

The increase of women within the country’s work force over the last few decades has generally impacted fertility rates, Clinton said, but not in Nunavut.

Nunavummiut women still have an average of three children, compared to the national average of 1.6.

“It’s not just a question of education either,” Clinton said. “There’s issues of adaptation to the modern economy, the welfare trap, housing… that are keeping Nunavummiut from participating in their economy.”

Clinton pointed to one movement in Nunavut, called Feeding My Family, which has made a public call for lower food prices in the territory.

The movement is well-intentioned, he said, but ineffective.

“The mechanism for lowering costs here is limited,” he said. “Bottom line: Nunavummiut don’t have the money to buy some of these products.”

While it’s not the only solution, Clinton said that education has proven vital to successful graduates from the territory.

Construction jobs for the territory’s major projects will continue to draw a good portion of Nunavut’s workforce, Clinton said, along with Nunavut’s “very viable” fishery, which currently employs about 200 people.

Clinton said he is also optimistic about the tourism industry; although it tends to offer smaller, lower-paying jobs, it employed 1,200 Nunavummiut in 2011 — even more than the construction industry.

Clinton admits he has no master plan for better integrating Nunavummiut into their economy, but he advises the territory to innovate and experiment with small, incremental changes.

“More will be gained from 10 small positive steps than one major one,” he said. “It’s an opportunity for Nunavut to investigate and discover.”