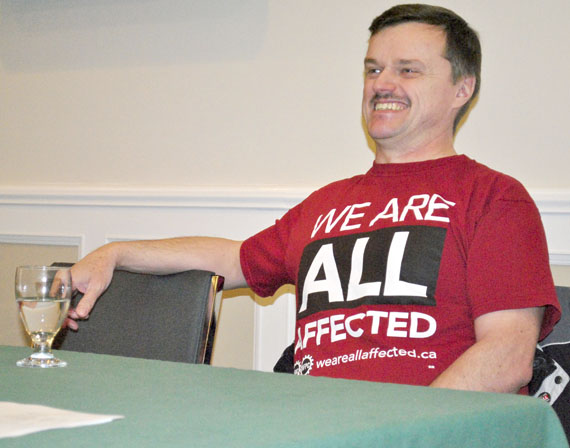 Geoff Ryan, an NDP supporter who serves as an official with the Public Service Alliance of Canada, said the Harper government sees “the redistribution of wealth as redistribution from families to corporations.” (PHOTO BY JIM BELL) 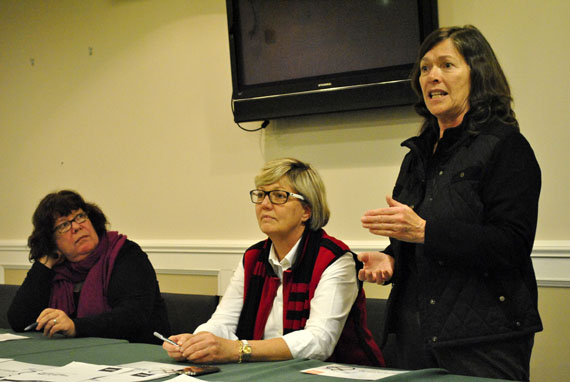 Boosted by pep-talks from three prominent MPs, the Nunavut New Democratic Party riding association used their annual meeting this past March 9 to start getting ready for the next federal election.

“This is the most conservative government that we’ve ever had,” Vancouver East MP Libby Davies, the NDP’s deputy leader in the House of Commons, told NDP supporters gathered at the Hotel Arctic in Iqaluit.

Under the fixed-date amendment to the Canada Elections Act, Prime Minister Stephen Harper would call an election for Oct. 19, 2015.

“We can have a government that is progressive and cares about the people,” Davies said.

She and her two Commons seat-mates lambasted Aglukkaq for ignoring food security in Nunavut and for her attacks on the United Nations food rights envoy, Olivier De Schutter.

“Every person we have spoken to since we got here has told us it’s a problem,” Davies said.

She took another dig at the government over the recent flurry of expense account and residency scandals that have afflicted some Senators, most of them Tories.

That includes Nunavut Sen. Dennis Patterson, who has been forced to defend his assertion of Nunavut residency after embarrassing news stories on CTV News.

“Who are these senators accountable to? Well, nobody,” Davies said.

Geoff Ryan of Iqaluit, a Nunavut representative for the Public Service Alliance of Canada, which represents many government employees in Nunavut, said Nunavut voters should support the NDP because it stands for the redistribution of wealth “for the good of the country.”

“The Conservatives see the redistribution of wealth as redistribution from families to corporations. It’s about time the ordinary Joe stands up and says enough is enough,” Ryan said.

Another sore point is a recent change to rules governing applications for social insurance numbers.

Under it, applicants must got to a Service Canada office.

But in Nunavut, Service Canada operates offices in only three communities, making it impossible for residents in most small hamlets to apply for SIN cards.

Breaking Aglukkaq’s hold on Nunavut will likely require a prominent candidate backed by a strong campaign.

In the May 4, 2011 election, she won re-election by taking 49.85 per cent of ballots cast in Nunavut. The NDP candidate that year, Jack Hicks, finished third with 19.4 per cent.

This result increased the Conservative’s share of the popular vote in Nunavut by 15 per cent over her performance in October 2008, when she defeated Kirt Ejesiak (Liberal), Paul Irngaut (NDP) and Peter Ittinuar (Green) with only 34.7 per cent of votes cast.

“We’re going to have a challenge finding someone who is going to run for the NDP in Nunavut,” said Doug Workman, the president of the Nunavut Employees Union.

Workman and Ryan, two of the best-known labour leaders in Nunavut, presided over the March 9 gathering, which saw the election of a new riding association executive, which has been depleted by the departure of former members.

In an election, Nunavut NDP supporters chose Workman as president, Bethany Scott as vice-president, and Aaron Watson as secretary-treasurer.

Ryan said the organization is now officially registered as a riding association with Elections Canada and even has some money left in its bank account.

The three MPs are actually visiting Nunavut as party of an NDP project aimed at exploring the social determinants of health, with a view to making health care funding an issue in the next election.

This guarantees that federal health care funding will rise by 6 per cent a year until 2016-17.

But after that, federal contributions to health care will be determined by the growth of the national economy and will likely increase by only 3 to 4 per cent a year under an arrangement that will continue until 2024.

Aglukkaq, the national health minister, fired a pre-emptive shot at the three MPs in a statement issued March 8.

“I am glad that some NDP MPs will be playing the role of tourist in Nunavut today. I hope they have come prepared to explain how NDP policies will be a disaster for Nunavummiut,” Aglukkaq said.

Describing the NDP proposal for a cap-and-trade system on carbon emissions as a “carbon tax,” she said this would drive up grocery and energy prices and “be devastating for families across our territory.”

“The NDP is completely out of touch with the needs of the North, and the interests of Nunavummiut,” Aglukkaq said.