“Most of them are [also] doing it to finish high school” 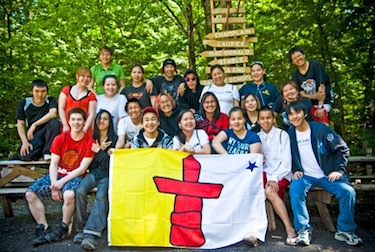 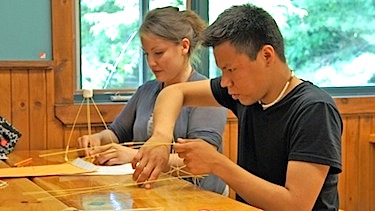 Cyre Yukon from Deline, who is facilitating a session at the orientation this year, and Brandon Tarrajuk, from Gjoa Haven, participate in a team-building project during orientation last year. (PHOTO COURTESY OF NYA)

Sixteen youth from Nunavut are en route to Ottawa and beyond June 27 to embark on a summer of work and discovery.

They’re part of a larger group of 44 young people, aged 15 to 22, from around Nunavut and the Northwest Territories, who are flying to Ottawa June 27 for a five-day orientation camp there.

Of the Nunavut students, 11 will work in summer camps for school credits and five will travel to the other side of the world for a seven-week work placement in the central African nation of Botswana.

The goal of the Northern Youth Abroad program is to help young people graduate from high school by providing them with 125 hours of work credits and these placements help students gain those credits.

But aside from that, NYA also wants to help northern youth “experience something outside of their own communities,” program assistant Kiara Zanyk Davie said.

Those going to Botswana will work in a daycare centre, although the centre which NYA participants used to work in has burned down.

Botswana, as a choice for NYA work placements, has worked well in past years because “it does have some similarities to the North, believe it or not,” said Zanyk Davie, mentioning the presence there of diamond mines and indigenous peoples.

The 15-year-old program used to be called Nunavut Youth Abroad but expanded to include the NWT in 2005. It’s the only program of its kind, geared specifically to the needs of predominantly aboriginal northern youth.

Being enrolled in school is not a requirement to get into the competitive program and, in fact, it can encourage participants to go back to school if they’ve dropped out, Zanyk Davie said.

“We have a much higher than average graduation rate,” among program participants, she said. That rate is 80 per cent, whereas in Nunavut it’s below 50 per cent. “We find this model of education, work and travel to be highly successful.”

At the end of their work placements, students in the program bring their new skills and self-confidence back to their communities.

Some of the 300 alumni of the program have started youth leadership groups in communities such as Grise Fiord, Zanyk Davie said. Others have become involved with local government.

This year, the NYA received applications from 29 different communities around Nunavut and the NWT with higher than average numbers coming from Baker Lake and Arviat where the program is especially popular. Younger siblings of past participants often apply.