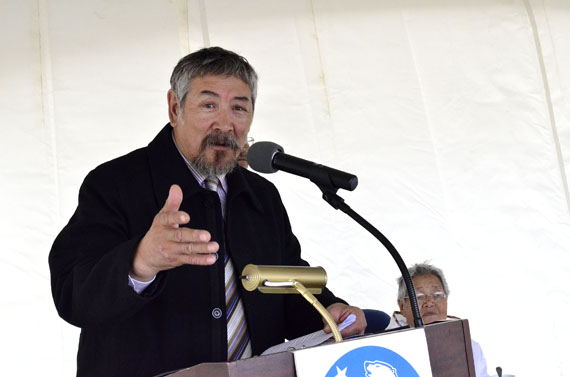 George Kuksuk, the minister of Economic Development and Transportation, speaks during groundbreaking ceremonies for the new Iqaluit airport project. He said the GN will continue to work with the federal government on improving transportation infrastructure in Nunavut. (PHOTO BY JIM BELL) 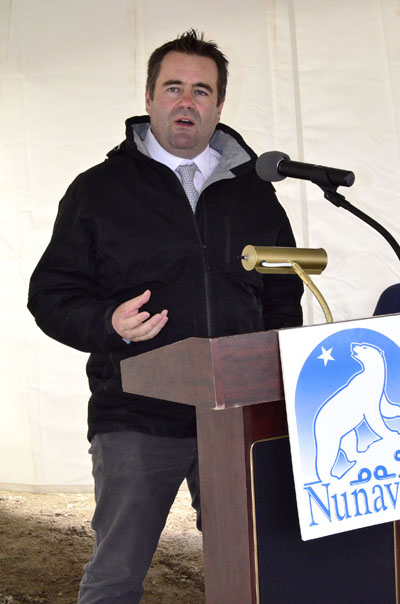 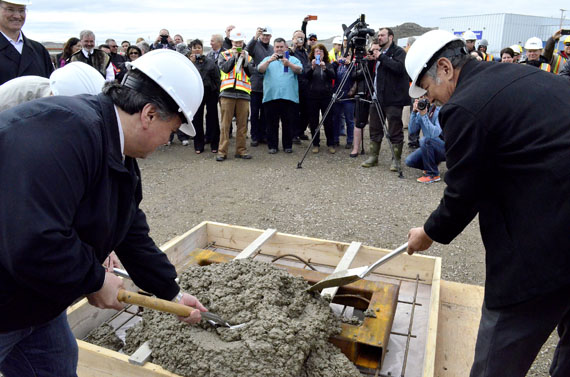 With the roar of a whirling cement mixer threatening to drown out their voices, a large group of Nunavut politicians, civil servants and contractors marked the start of work on their 30-year $400-million-plus Iqaluit airport project July 10 with a promise-laden ribbon-cutting and ground-breaking ceremony.

A consortium of companies called Arctic Infrastructure Partners — which the Government of Nunavut picked last summer — will build and run the new airport complex for the next 30 years under a private-public-partnership, or “P3.”

The job includes a big new building to house airport equipment and vehicles, a fancy new terminal, and repaving of the entire runway, along with the addition of a new apron for parking aircraft.

The GN says the price tag, in today’s dollars for the construction phase of the project, stands at $298.5 million.

But that figure does not take inflation or interest rates into account, or the cost of paying the partnership to run the completed airport over 30 years.

Taking all factors into account, the total cost — or “net present cost” — of the project after 30 years is estimated right now at $418.9 million, a GN document said.

But the GN also said that’s cheaper than if they had decided to do each of the three project components by themselves.

The do-it-alone cost would have totalled $518.7 million, the GN estimates.

Along with its Quebec-based subsidiary, Sintra Inc., Bouygues is responsible for overseeing construction.

A Bouygues project manager, John Wood, who previously worked in Wales for Bouygues in the United Kingdom, will serve as CEO of the P3 group.

Over the life of the 30-year deal, the GN will pay the partnership a total of $278 million in “service payments.”

And altogether, the GN estimates that the “net present cost” of all its payments to the P3 group will total $376.2 million by the end of 30 years.

“The Inuit training plan developed by the Arctic Infrastructure Partners will ensure Nunavut beneficiaries are able to attend post-secondary education and get the necessary experience to earn journeyman credentials in areas such as carpentry, plumbing and electrical, said Sammurtok said.

Sammurtok said Inuit will also get a chance to train as firefighters, heavy equipment operators and other occupations after construction is done.

The GN’s agreement with the P3 partnership states that 15 per cent of workers in the construction phase of the project must be Inuit beneficiaries.

If not, the private partners must pay a one-time penalty, calculated according to a formula set out in the deal.

But in the public copy of the contract, the dollar amounts are blacked out.

After construction is completed and operations begin, the P3 partnership must ensure 20 per cent of workers at the new airport are Inuit.

That is supposed to increase, step-by-step every five years, to 60 per cent Inuit labour by the end of the 30-year deal.

Here’s a short summary of who and what’s involved in the Iqaluit airport project.

Who will run it?

An entity called Nunavut Airport Services Ltd., a subsidiary of Winnipeg Airports Authority Inc., will operate the airport for the GN — during and after construction — beginning July 21, 2014.

Who pays for it?

At the end of it all, the GN will pay for most of it.

All GN payments to the P3 group will total $376.2 million after the 30-year deal is done. The GN also spent money on the procurement process.

And the P3 partnership borrowed $141.98 million in a bond sale this past September. Those bonds were priced at an interest rate of 5.092 per cent per year over 34 years.

That bond issue was made possible by two things: a federal government decision to raise Nunavut’s debt cap from $200 million to $400 million, and a positive credit rating of Aa1 from Moody’s Investor Services.

How much will it cost?

When will they complete the project?

Work is to be done by August-September of 2017.

Who will work there?

What are they building?

• A new passenger terminal to be located behind the old Ukkivik building off Federal Road.

• A new service building to be located on a vacant lot near the old airport building.

The GN has posted documents related to the Iqaluit airport project on this web page.