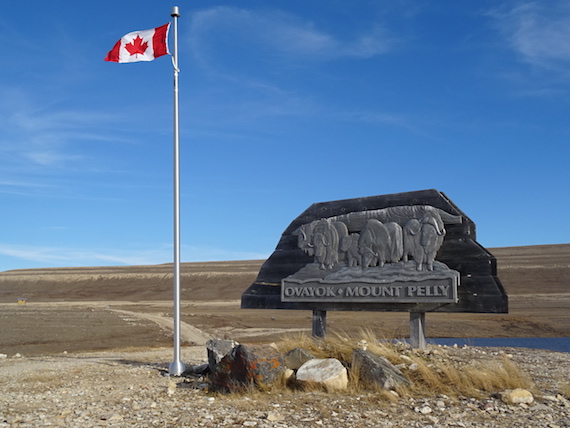 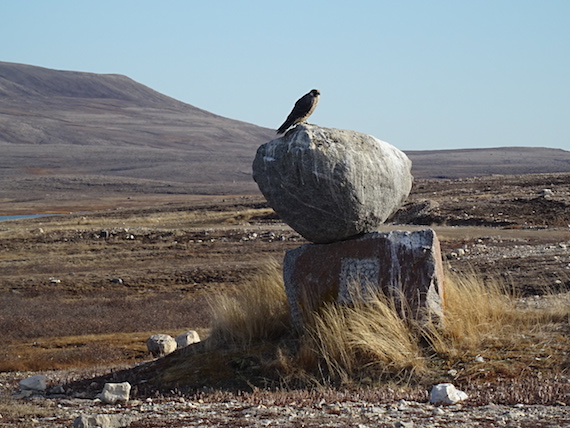 Birds of prey are common sights around Ovayok park. (PHOTO BY JANE GEORGE)

The Government of Nunavut and the Qikiqtani Inuit Association want to hear from you, if you’re interested in parks, tourism and Inuit culture and heritage.

Until Aug. 31, the GN is accepting nominations for appointments to the Community Joint Planning and Management Committee for Ovayok Territorial Park, 15 kilometres east of Cambridge Bay.

Members of the committee provide recommendations to the GN on the operation and management of the park.

If you have demonstrated knowledge and experience, send your application by Aug. 31, 2018, at 5 p.m., says a recent news release.

Application details are available here or from gnoble@gov.nu.ca.

The predominant feature of this park is a 183-metre esker known as Ovayok (Mount Pelly). Behind this are two more eskers called Inuuhuktu (Baby Pelly) and Amaaqtuq (Lady Pelly).

Inuit lore says the three eskers are a family of giants who starved while crossing Victoria Island.

First, the father, Ovayok, died. Next the son, Inuuhuktu, and finally the mother, Amaaqtuq, who was carrying her baby, perished.

Ovayok Territorial Park is not new: it was first identified in 1970 for protection as a territorial park because of its environmental, historic and cultural importance.

Following the 1988 Tourism and Parks Plan for Cambridge Bay, the Government of the Northwest Territories prepared the Mt. Pelly Territorial Park Management Plan in 1999.

It became a Nunavut territorial park in 1999.

The Qikiqtani Inuit Association has also put out a call for applications from “energetic and dynamic individuals” to become members of the Joint Parks Management Committees in the Baffin region and of the QIA Co-Management Committee.

These applications are due by Sept. 7.

“To be considered, candidates must be actively and personally committed to represent the interest of Qikiqtani Inuit and have a sound understanding of the Nunavut Agreement as it relates to the roles and mandates of the position.”

The QIA is looking for new members to join the Joint Parks Management Committees in Grise Fiord, Resolute, Sanikiluaq, Pangnirtung and Qikiqtarjuaq, for three- or four-year terms.

The QIA is also seeking members for the Nunavut-wide Territorial Parks Co-Management Committee for a three-year term, to provide advice and support on the overall management of all territorial parks across Nunavut.

If you’re interested, you can submit a detailed resume and cover letter, in Inuktitut or English, demonstrating your skills and experience to nominations@qia.ca or, for more information, contact the local community liaison officer in your community.