Nunavut photographer’s iglu to be featured on First Air plane 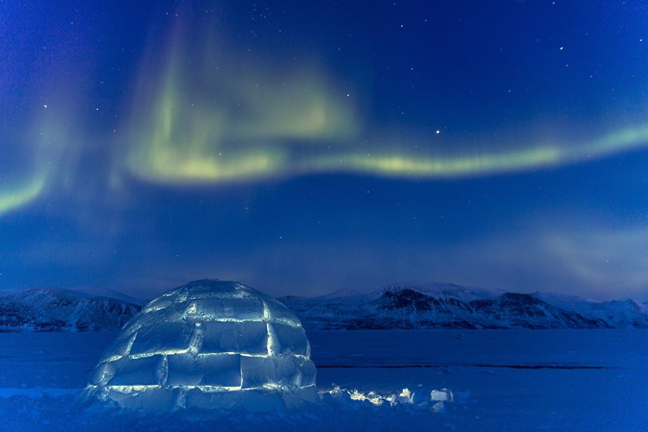 An image resembling this photograph, by Niore Iqalukjuak, is to be featured on a First Air ATR series aircraft. (PHOTO BY NIORE IQALUKJUAK)

A Baffin Island hunter and community leader who was bitten by the photography bug about 14 years ago—taking a picture of a wasp—will soon have a photograph on the tail of a First Air plane.

Niore Iqalukjuak made it official Sept. 9 when he announced to his many Facebook friends and fans that a photo he took of an iglu lit from the inside, and haloed above with northern lights, will be featured on a First Air ATR 42-500 series aircraft.

“To have that kind of a canvas for your pictures that travels here and there, and for people to see, it’s something I’ve wanted for years,” said Iqalukjuak, a native of Arctic Bay who is currently living in Clyde River.

Jackie Dankwa, spokesperson for First Air, said they were excited to have Iqalukjuak’s image on the tail of their new aircraft and that he will be the first photographer from Clyde River to have the honour.

“Once we started looking at his pictures, we could not stop,” Dankwa said in an email.

“These are the types of pictures that we are looking for to grace the tail of our aircraft and to let the world know that not only is Canada’s north beautiful, but we also have great photographers.”

She said the company hopes to select more northern photographers in future, for other aircraft tail images.

Iqalukjuak, whose stunning wildlife and landscape images have been featured regularly in Nunatsiaq News, is becoming increasingly well known in Nunavut and beyond, especially after earning a prestigious mentorship spot with professional photographer Dave Brosha.

“Niore photographs Nunavut with passion and truth,” Brosha said at the time, on why he chose the Clyde River-based photographer for his mentorship program in 2015.

“He explores with his camera and delights in sharing his very unique world with others.”

Iqalukjuak said he’s tried to enter First Air’s plane tail contest before, but usually he’s in a rush and misses deadlines to enter.

This year, First Air sought him out, about a month ago, through email.

But even then he was still rushed—First Air staff who contacted him gave him about four hours to send some images of landscapes and wildlife.

Iqalukjuak was at work at the time so he scrambled to scroll through his images and pick his favourite ones.

The company came back requesting high resolution versions of some iglu shots which Iqalukjuak took in March of this year at a place called Naqsaq.

Then they sent him a photo release form he needed to sign but Iqalukjuak was out hunting when it came in and he missed the deadline for sending the form back by a day.

He signed it anyway and sent it in, hoping it wasn’t too late. It wasn’t.

“It was a pretty big honour to have one of your pictures selected for that,” Iqalukjuak. “It’s amazing. What a journey.”

If that wasn’t enough, Iqalukjuak has been asked to travel to London, at the end of this month for the opening of the Nunavut Arts and Crafts’ exhibition at the Canadian Embassy, called Floe Edge: Contemporary Art and Collaborations from Nunavut, which features some of his photographs of northern lights and landscapes in North Baffin.

The London opening is scheduled for Sept. 29—his 50th birthday.

“That’d be pretty wicked,” he said, adding he just had to get some passport issues resolved.

Another Nunatsiaq News contributor, Isabelle Dubois from Kuujjuaq, had a photo featured on a First Air plane in 2013.

And a reproduction on an Arctic hare, taken by Clare Kines of Arctic Bay, also a frequent contributor, has decorated the tail fin of a First Air ATR-42 turboprop passenger aircraft since 2012.