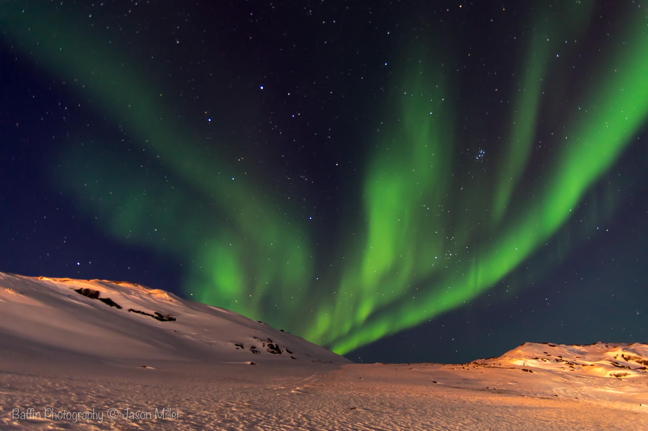 For Iqaluit resident Jason Miller, whose stunning photo of northern lights now adorns the tail of First Air’s newest airplane, there’s no temperature too cold for taking outdoor pictures — as long as there’s no wind.

“In -40 [Celsius] and no wind, I’m still happy to be out looking for northern lights,” the longtime photographer, northern resident and pilot said Feb. 16.

Miller, who started his career as a co-pilot on a Twin Otter 17 years ago in Resolute Bay, said he entered an internal photography contest held by First Air in 2015 — and won, along with one other co-worker.

“As of my first flight, because of the amazing sights, I knew I had to carry a camera around with me,” said Miller, who now works as a training captain for the airline.

Miller’s image, which features a well-known Arctic landscape with ribbon-like strands of aurora stretching out across a star-studded night sky, graces the tail of First Air’s new ATR 42-500.

The 42-seat passenger plane took off for the first time on Feb. 9 from Yellowknife, en route to Hay River, said a Feb. 9 news release from the airline.

First Air, which currently owns 12 ATRs, said it plans on introducing more aircrafts to its fleet later this year, including a ATR 42-500 combi capable of carrying both cargo and passengers, as part of a three-year, $110-million investment.

“The new 500 series will be used to expand the fleet, as well as to gradually replace the 300s on scheduled routes,” First Air’s release said.

The new aircraft are ideal for the Arctic’s harsh climate, the release said, and are able to land on gravel runways.

But for Miller, it’s all about the beautiful northern scenes just waiting to be captured.

“I love the incredible landscapes around Nunavut and the pure remoteness of the area. The Arctic light can be very magical,” Miller said.

For each of the past four years, Miller said he’s put together a calendar of his best photos from around the eastern Arctic.

And always looking for new photographic opportunities, Miller said he’s been getting more and more into portrait photography from his small Iqaluit home studio over the past few years.

“Photography is a great journey to be on and I look forward to where it will take me next,” he said.

To see more of Miller’s photos, and to learn some of the stories behind those photos, you can visit his website by clicking here.