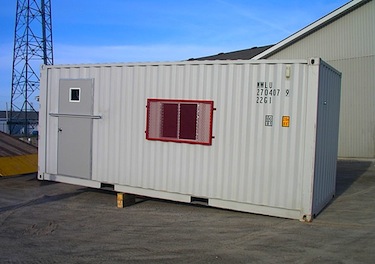 While most in Nunavut transform used sea cans into storage units, this sea can has a new life as a small housing unit. (PHOTO COURTESY OF DESIGN SPACE TRAILERS INC.)

The housing corporation has been taking stock of surplus materials used to build public housing under the Nunavut Housing Trust and Canada’s Economic Action Plan and its numerous leftover sea cans.

The corporation is “making sure that we get the best possible use and return on our investment of this product,” Alain Barriault, the president of the housing corporation, said Oct. 29 in Nunavut legislature’s committee of the whole.

That’s after Quttiktuq MLA Ron Elliott asked whether a plan to sell the used sea cans to Nunavummiut is still in the works.

Local housing organizations will have the first dibs on them for cold storage, Barriault said.

After that, they’ll be sold to government departments and then to the general public.

“We do not intend them to be causing a clutter within the communities, so we have to be organized, I guess, in the fashion that we do dispose of them. Many are very close to being available for sale now to the public, so you should be seeing notices locally in some of your communities in the very near future,” Barriault said.

Designed to carry heavy loads and support heavy loads, the corrugated steel shipping containers known as sea cans are designed to resist harsh weather and be transported by ships, trains and trucks.

Invented in 1956 by a trucker, shipping containers now transport 90 per cent of all cargo, and, as in the case of developing countries like South Africa, many end up staying in Nunavut because there is nothing produced locally that can be shipped back in them.

In 2009, summer, shipping containers will be recycled as modular units for a camp to house 30 workers involved in the clean-up of a DEW line site on the Boothia Peninsula.

And Iqaluit’s Humane Society, which has plans to build a new shelter for abandoned and unwanted pets in the city, has also wanted to use donated sea cans to expand its shelter.