“The Department of Health would like to incorporate Inuit knowledge” 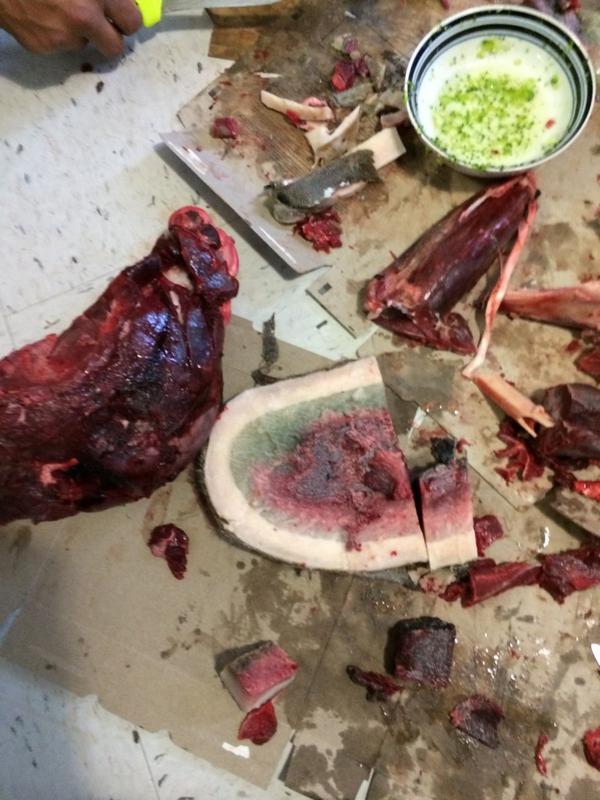 How Inuit eat fermented walrus, or igunaq, may hold some clues for effective addictions treatment in Nunavut. (PHOTO COURTESY THE JERRY CANS/TWITTER)

Nunavut’s health department plans to embark on a study of potent, fermented country foods throughout the territory to see if their traditional consumption can point the way to better addictions treatment among Inuiit.

Among the goals of this research, for which a request for proposals was issued earlier this year: to find out whether Inuit learned how not to over-indulge in these foods, which may contain alcohol.

That knowledge could be applied to addictions treatment, the health department’s associate deputy minister Karen Kabloona said June 1 in the Nunavut legislature’s committee of the whole.

“Inuit have natural protective behaviours that we can apply to our population health promotion work and also to addictions treatment in the future,” Kabloona said.

To that end, in February, the Government of Nunavut put out the RFP called “Inuit protective behaviours for fermented food,” calling for a research study on that topic.

“We are looking at the different types of fermented foods. We want to know if there is alcohol in them.” Kabloona said to the meeting of the COW studying the health department’s budget request for 2018-19. “We want to document how Inuit protect each other from overconsumption.”

Nunavut Arctic College would also incorporate this knowledge about fermented foods into its social work program, the RFP said, and the results would also be shared with the public.

According to the RFP, Inuit are careful when introducing fermented foods, which contain lactic acid, alcohol or gas.

“Small portions are introduced first and the individual is monitored carefully,” the backgrounder in the RFP’s terms of reference said. “The Department of Health would like to incorporate Inuit knowledge of protective behaviour into population health, substance misuse prevention and addiction treatment programming in Nunavut.”

The RFP is looking for a research team which will survey all Nunavut communities, and look at history and current practices in preparing fermented country foods.

The researchers be asked to purchase samples and “test foods to identify potentially intoxicating substances.”

The GN wants to receive a discussion paper on the oral and literary review history of fermenting as well as videos.

The results will include information on how over-indulgence was avoided, detail the Inuktut terminology on fermentation and feature a gathering of elders as well as a feast of fermented food.

In some studies, fermentation has been shown to protect against influenza virus and offer a range of beneficial bacteria that can reduce inflammation.

“Igunaq is good for the digestive system as it cleans it completely of any foreign objects such as viruses and sickness a person may have. A person may experience a natural ‘high’ if they have not eaten aged meat for a while,” said Elijah Tigullaraq in June 2008, in a posting that can be found online.

“Men who grew up with igunaq are usually more physically muscular than those who have not. Igloolik, Hall Beach and Cape Dorset have muscular looking men compared to other communities on Baffin Island. It is believed that igunaq contributes to the physical appearance of the people who eat it.”

More recently, igunaq and other fermented foods have been associated with botulism when the fermentation does not take place in ideal temperatures.

The bacteria that causes botulism are naturally found in walrus, seal and sometimes whale, and if aged meat isn’t prepared or stored in the correct environment, botulism bacteria can cause toxins to form.

This can lead to sickness, paralysis or even death, prompting a GN health advisory on proper preparation and storage, last August.