“The whole process was very do-it-yourself” 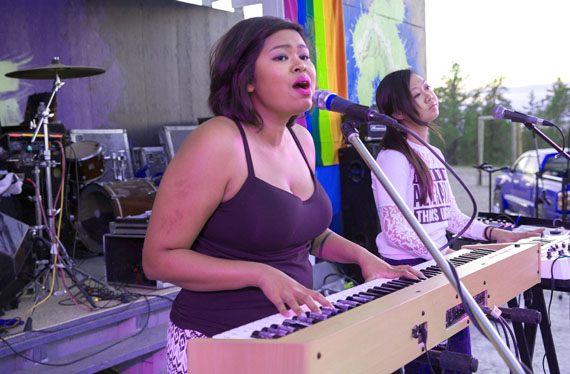 In the absence of any recording facilities in the western Nunavut town of Cambridge Bay, musicians Gloria Guns and Christine Aye had to find creative solutions when recording their new EP.

So, the women, who make up the synth pop duo Scary Bear Soundtrack, used duct tape to prop up a broken microphone stand, and stretched pantyhose over a bent coat hanger to create a microphone windsock.

Once they recorded the tracks in Guns’ bedroom, they emailed them off to a producer in southern Ontario for mixing.

The result: Ovayok Road, an Arctic soundscape of dreamy vocals over dance beats — an album you could move to at a party as easily as you could relax to in the bath.

“The whole process was very do-it-yourself, but we’re quite pleased with the result,” said Guns, on her way back from the group’s recent show at Yellowknife’s NWT Pride festival.

“The first three songs (Ovayok Road, Victoria Island and Fault Lines) are synth pop dance tunes with a dream pop feel and some inspiration from the shoegaze music genre. My First Northern Lights is a slower pop tune that is still synth-heavy.

“The last two tunes are a bit of an anomaly in terms of musical style.”

The title track, Ovayok Road, is named for the stretch of gravel that connects Cambridge Bay to Ovayok Territorial Park, the home of Mount Pelly.

The song itself plays like an ode to outdoor night life in the Arctic summer, similar to the more ethereal My First Northern Lights, a song where Guns and Aye literally open the curtains of their living rooms to reveal the aurora. (This one’s a fan favourite, Guns says.)

Other tracks, like Fault Lines, take on much heavier issues: in this case, sexual violence and rape culture.

The track Victoria Island evokes the feeling of isolation both artists have felt living in the remoteness that is Nunavut. But the song also addresses the growing protest spirit among Indigenous groups in Canada.

Scary Bear Soundtrack is only recently northern — the band originally formed in Ottawa and was named when a group of friends discovered a mangy old teddy bear that had been stored away in an attic for decades.

Ottawa lawyer Gloria Song, who performs under the name Guns, worked in Cambridge Bay for a few years until recently relocating south.

She and Aye, a community justice outreach worker in Cambridge Bay, have had to learn to work together from a distance.

“It’s not easy,” Guns said. “But lots of bands have made it work and we’ve been able to do it so far. Lots of email. Of course, with the limited bandwidth in Nunavut, that can be a challenge sometimes.”

The duo would love to return to play in Nunavut soon, Guns said. For now, Scary Bear Soundtrack will celebrate Ovayok Road’s release in Ottawa Aug. 15 at the Pressed Urban Gourmet Sandwich Bay at 750 Gladstone Ave.

You can listen to a preview of the new EP here.