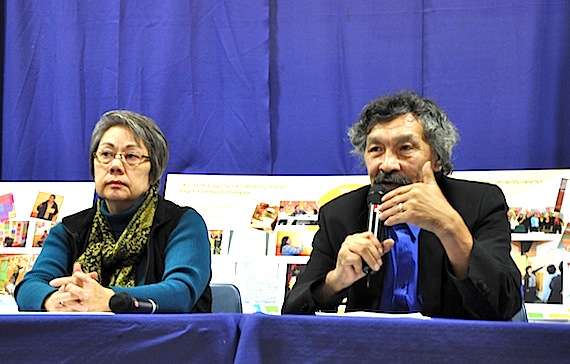 Premier Eva Aariak and Nunavut Tunngavik Inc.’s vice-president Jack Anawak talk at a press conference to close the territory’s first poverty summit Nov. 30. The product of the summit, the “Makimaniq Plan: A Shared Approach to Poverty Reduction,” should be made public in the coming weeks. (PHOTO BY SARAH ROGERS)

Nunavut’s first territory-wide poverty summit wrapped up in Iqaluit Nov. 30, delivering a vision to cut poverty with the help of all Nunavummiut.

The Poverty Reduction Action Plan produced by the summit is still a few weeks away from release, although the plan has a name – Makimaniq, Inuktitut for “empowerment.”

“We’ve agreed on a shared approach to poverty reduction — a unique Nunavut approach,” said Premier Eva Aariak. “We want to return to self-reliance as a guiding principle.”

The 45 participants at the three-day summit finalized a draft of the plan Nov. 30, which summit hosts says must first be approved before it goes public.

But Aariak’s government has already committed to meet certain objectives by the end of its mandate in 2013, including:

• the revision of the public housing scale, to reduce disincentives to employment and support other social programs. “Some people refrain from acquiring jobs so their rent won’t increase and that has been a major problem,” Aariak said;

• the establishment of a culturally-relevant pilot program for addictions treatment;

• the creation of a Nunavut Food Security Coalition, to strengthen or develop food programs and provide better access to country foods; and,

• the drafting of legislation for the implementation of the long-term Poverty Reduction Action Plan, to “ensure that the momentum created by this work continues beyond the term of any one government or organization,” a Government of Nunavut news release said.

When asked when that might be introduced, Aariak said establishing legislation “doesn’t happen overnight, it takes time.”

The rest of Makimaniq’s action plan will stem from concerns that were identified at roundtable discussions held across Nunavut over the last several months.

The finalized poverty reduction action plan will built around these six major themes:

• collaboration and community participation; and,

Nunavummiut have already shown they want to be part of Makimaniq, which will be vital for the plan’s success, said NTI’s Jack Anawak.

“People have shown that they want to participate,” he said, “and not just as the recipients of handouts.”

NTI’s resource revenue policy may not factor directly into the action plan, but the $2 billion in royalties it expects to collect from mining projects over the next couple of decades could be a huge windfall for Inuit beneficiaries.

Anawak acknowledged that, but added Nunavummiut would have to be prepared to handle that kind of financial gain.

“What we should be doing is preparing people for the event [where they could] receive a cheque in the mail,” he said. “That kind of education would have to be part of the process.”

But for now, Nunavummiut must wait to see the rest of the Makimaniq’s details, while poverty summit participants review the plan one last time.

But the closed-door aspect of the meeting wasn’t to exclude the public, but rather to “create a safe environment where they could speak openly,” he said.