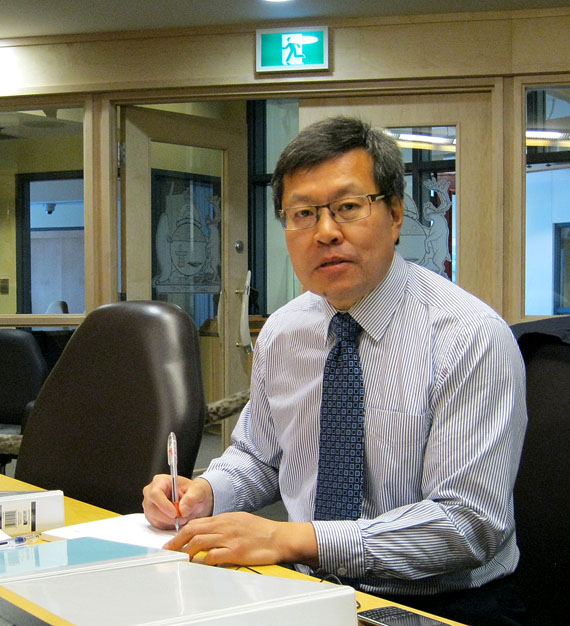 Peter Ma says he “would have liked” to follow through on big plans to prop up the Qulliq Energy Corp. But the Nunavut Premier Peter Taptuna shuffled Sept. 23 him to the job of president of Nunavut Arctic College. (PHOTO BY PETER VARGA)

It took almost 10 months for Peter Ma to get a grasp of the issues facing Qulliq Energy Corp., Nunavut’s government-owned power corporation, which he heads as president and CEO.

Then, Sept. 23, just three days before a week-long board of directors’ conference, Ma got word from Nunavut Premier Peter Taptuna that he would be re-appointed to another territorial Crown corporation.

The premier’s office announced Ma will leave QEC to assume the role of president of Nunavut Arctic College, effective Oct. 14.

Alain Barriault, former president of Nunavut Housing Corp. and principal secretary to the premier during the transition to the new government, will take the lead role at the power corp.

“Obviously I would have liked to stay, and finish up what’s been started here, because I think there’s been really good momentum going,” Ma told Nunatsiaq News Sept. 29, just hours before he left Iqaluit for a QEC board of directors retreat in Cambridge Bay.

“But those are decisions that I can’t make,” he said. “I just have to do my job as a good public servant, and make sure the mandates I’m responsible for, going forward, are fulfilled.

“So I think I leave the corporation, hopefully in better hands than when I got here. I think we’ve made some really positive changes, which I would’ve liked to continue with.”

Ma described some of those hopeful intentions Sept. 23 at the Nunavut Legislative Assembly’s standing committee on oversight of government operations.

He started with the public’s poor perception of the power corporation.

“Without the ability to ask questions of the corporation in this house and to hold the corporation to account, there has been speculation on the part of the general public and likely, members [MLAs of the legislative assembly] too, on the corporation’s conduct,” he told the standing committee.

With that, Ma said he was committed to improving the corporation’s “accountability, transparency and integrity.”

“Certainly that’s one of our goals is to be a little more accountable, and do more public communication,” he told MLAs.

He then broke the news that recent upgrades to QEC’s biggest power plant, in Iqaluit, went $12 million over budget, some 42 per cent more than the original $28 million.

Moreover, Ma said that much-needed replacements to power plants across the territory will also cost much more than originally thought.

The first two power plants in line for replacement, in Taloyoak and Qikiqtarjuak, cost 40 to 70 per cent more than first estimated.

“I think we’ve been low-balling the numbers to our detriment,” the president and CEO told the standing committee.

Despite some public opposition to the largest of the two plants, known as Armshow South, located 20 kilometres south of Iqaluit, Ma is optimistic that the corporation can find a way to follow through with the project.

Hydro power, which harnesses electricity by damming rivers, is a “feasible alternative” to diesel, and much cheaper in the long run, he said. QEC’s two-stage hydro project could cost up to $450 million.

Ma told MLAs that he organized series of workshops for QEC’s board of directors, Sept. 30 to Oct. 5 in Cambridge Bay, which he called a “retreat.”

QEC’s 10-member board of directors is largely new, appointed after Ma became president.

The territorial government appointed five new members in January to replace the mass resignation earlier that month of all but one member. Another four members joined the board in June.

The board retreat will bring the new team together to establish members’ roles, and build the corporation’s strategic plan for the next three years, Ma said.

The board’s first goal “is to improve the overall operating efficiency” of QEC’s power delivery, he said.

Despite his re-assignment to the position of president of Nunavut Arctic College, Ma will follow through with his work at the board retreat. Barriault will also attend as his successor.

Barriault’s presence is “a good thing, even though he’s not actually president until Oct. 14,” Ma told Nunatsiaq News. “We actually had already started the transition as of Friday [Sept. 23] afternoon.

“He’s a long-time colleague of mine, and I think he will do a good job. The groundwork’s been laid out for him,” Ma said, adding that the retreat will “allow him to jump-start some things.”

Barriault is an engineer by trade, Ma said, which could be part of the reasoning behind the premier’s decision to appoint him as president.

Neither the premier’s office nor Nunavut’s department of intergovernmental affairs answered calls for comment on the appointments, Sept. 29.

Originally an accountant by profession, Ma, like Barriault, is a veteran bureaucrat with the territorial government.

Ma recalled that he was a member of Nunavut Arctic College’s board of directors in 2001 and 2002.

Although he admitted his re-appointment to Nunavut Arctic College from QEC is unexpected, Ma said it does not come as a complete surprise.

“I have a pretty broad skill set, so I’m a relatively easier deputy to move around, just because of my versatility,” he said.

“We’re at the pleasure of the premier. I’m not the first person to have been reassigned responsibilities for the good of the public service.

“I probably won’t be the last either,” he laughed.