QEC eyes dual-phase project across the bay from Iqaluit 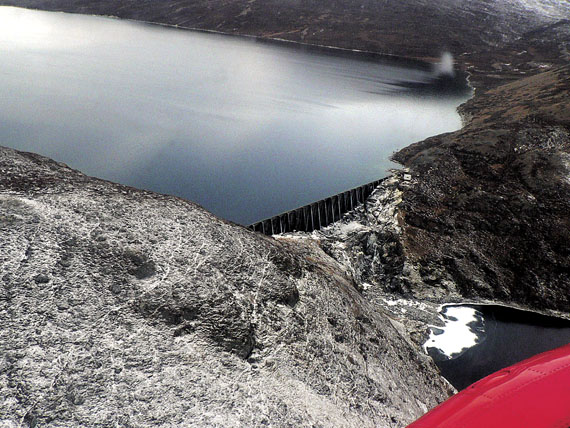 In 2005, officials from Nunavut visited this 36-megawatt power plant in Kangerluarsunnguaq, Greenland, about 50 kilometres south of Nuuk, which was completed in 1993. Nunavut officials are now re-starting work on a hydroelectric project near Iqaluit. (FILE PHOTO)

The Qulliq Energy Corp. is starting a feasibility study and environmental review on two multi-million dollar hydroelectric dams near Iqaluit, hoping someone will help fund and build the two dams by 2019 and 2030.

QEC has been pressing for a hydro dam for six years now, although the cost of the project — and the cost of studies needed before construction can begin — has acted as a big deterrent.

The $4-million feasibility study is being paid for by the QEC themselves, despite pleas for financial assistance to foot the bill.

Now that the feasibility study looks set to get underway, potential investors can start thinking about financing the project, QEC’s director of engineering Stephen Kerr said at an Iqaluit City Council Dec. 11.

He spelled out the many different options at the meeting.

“You can go into this whole thing where the [Government of Nunavut] owns the whole thing, you can go into business with some of the birthright corporations here, we can do a [public-private partnership], there’s all kinds of options here,” Kerr said.

Although the price may run as high as $450 million — an estimate given by QEC’s president Peter Mackey earlier this year — Kerr said people in Iqaluit would eventually see their power bills decrease because of this investment.

“Will the ratepayers be slapped with a rate increase? I don’t think so. I think it’s going to go the other way,” Kerr said, adding discussions with the Utility Rate Review Board will have to be made.

At city council, Richard Cook of Knight Piésold, originally a South African consulting firm, said a more accurate estimated cost for the project will emerge after a geotechnical study this summer.

Cook also spelled out what the project would look like if funding went ahead.

Two hydro dams would be built, one at Jaynes Inlet, which would generate 10 megawatts of power. That would be completed by 2019.

The other dam would be at Armshow South, located just across the bay from Iqaluit a few kilometres away from the Jaynes Inlet site.

Armshow South would generate six megawatts of power, and is expected to come online by 2030 when Iqaluit’s demand for power is predicted to be greater than now.

Both dams would be connected to a power grid that would loop around Sylvia Grinnell Park and enter Iqaluit on an 84-kilometre system of power lines.

Cook said the cost of hydro would be cost-competitive with the current cost of diesel generation in Iqaluit, and that while the price of diesel will continue to rise, the cost of generating electricity via hydro will remain the same.

Cook gave an 18-year schedule of their next steps. Key steps include:

• Submitting a project description to the Nunavut Impact Review Board and other agencies — Feb. 2013;

• Completion of the feasibility study and submission of the Draft Environmental Impact Statement — Mid-2014;

There are also several environmental “considerations” Knight Piésold did highlight, however they believe there will be “limited fisheries impacts.”

Those considerations include the land-locked char in upper and lower lakes near the Jaynes Inlet site, as well as modest use of the area by wildlife such as birds and caribou.

QEC is holding a public information session on the topic in Iqaluit Dec. 12, 6 p.m. at the Anglican Parish Hall.