“As Inuit that’s what we do, we sit down and resolve our issues” 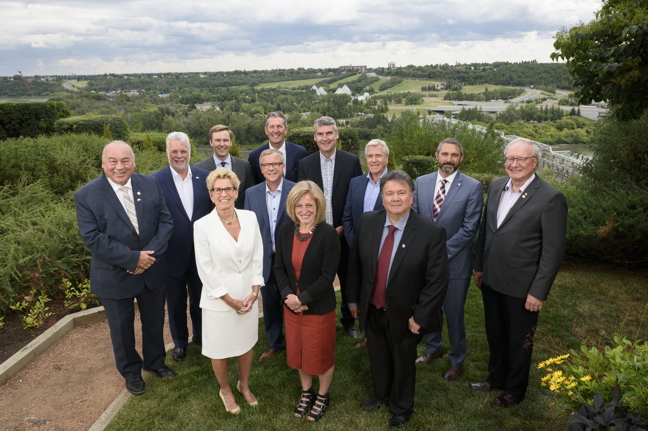 Nunavut premier Peter Taptuna says the decision from the nation’s three main Indigenous leaders to skip a meeting with Canadian premiers ahead of an annual leaders roundtable in Edmonton, July 17, was “disappointing.”

“For me it was a little bit disappointing because I really had expected Inuit Tapiriit Kanatami to be a participant in this meeting,” Taptuna told Nunatsiaq News by phone from Edmonton, July 19, at the conclusion of the two-day Council of the Federation meeting of Canada’s premiers.

ITK President Natan Obed, along with National Chief Perry Bellegarde of the Assembly of First Nations and leader of the Métis Nation Clément Chartier, boycotted a meeting with Canada’s premiers that was scheduled a day before the annual CoF meetings began in earnest.

The three leaders argued that the timing of the meeting perpetuated the segregation of Indigenous representatives from intergovernmental talks.

Taptuna said he respected the leaders decision not to attend, but that “most premiers were disappointed,” by the boycott.

“As Inuit that’s what we do, we sit down and resolve our issues,” he said, citing obligations on behalf of the federal government and Government of Nunavut, within the Nunavut Land Claim Agreement, to engage with Inuit.

“We’re not always going to agree on the same subject.”

The Council of the Federation—hosted by Alberta premier Rachel Notley July 18 and 19—is a conference held in different regions each year and is meant to build cross-jurisdictional collaboration on issues common to the provinces and territories.

Topics discussed by the premiers at this year’s gathering included employment, economic growth, trade, the justice system and the legalization of cannabis.

Taptuna led a discussion on Nutrition North, the government-subsidized food program that replaced the Food Mail system in 2011 and is utilized in 221 communities in remote and northern communities in Canada.

“The program has to be fixed, its not doing what its supposed to do,” Taptuna explained, reiterating recommendations made by the Auditor General of Canada to improve the program in 2014.

Canada’s three northern premiers spoke out against a national carbon tax proposed by the federal government at last year’s Council of the Federation meeting in Whitehorse, Yukon.

The tax—as it’s currently proposed—initially places a $10 per tonne levy on carbon-based fuel in each province and territory, but that will slowly climb to $50 per tonne by 2022.

Taptuna says opposition to the tax persisted at this year’s meeting—and the federal government’s response to those concerns remains unclear.

“We’ve talked a lot with the federal government about exempting home heating fuel, generating fuel and aviation fuel,” he said.

“We don’t know exactly where we stand on this with the federal government, they haven’t really responded but they know that the cost of living in Nunavut is extreme and there’s a lot of vulnerable people.”

Along with critical housing and infrastructure shortages, Nunavut also boasts the highest number of marijuana users per capita in the country, a statistic that will likely impact Nunavut’s service under-capacity when cannabis becomes legal in Canada, expected July 1, 2018.

“It’s a complicated issue, it affects many different moving parts and it has a ripple effect on health, justice and various other things we take for granted daily,” Taptuna said.

Premiers agreed to form a national working group tasked with analyzing the issues and reporting back by November 2017.

A twelve-month delay on legalization—until 2019—proposed at the conference by Manitoba premier Brian Pallister, would “have been more ideal” to work with, Taptuna admitted.

But each jurisdiction will have to work with whatever deadline is set down by Ottawa, he added.

“As politicians, we’re tasked with that and we do need some major assistance from all jurisdictions,” he said.

“We want our federal partners to participate and include themselves in making sure we come up with a plan that has the least impact on our people.”

Nunavut’s finance minister, Keith Peterson, announced in Nunavut’s legislature that the territory would conduct its own consultations ahead of the legislature’s fall sitting in October.