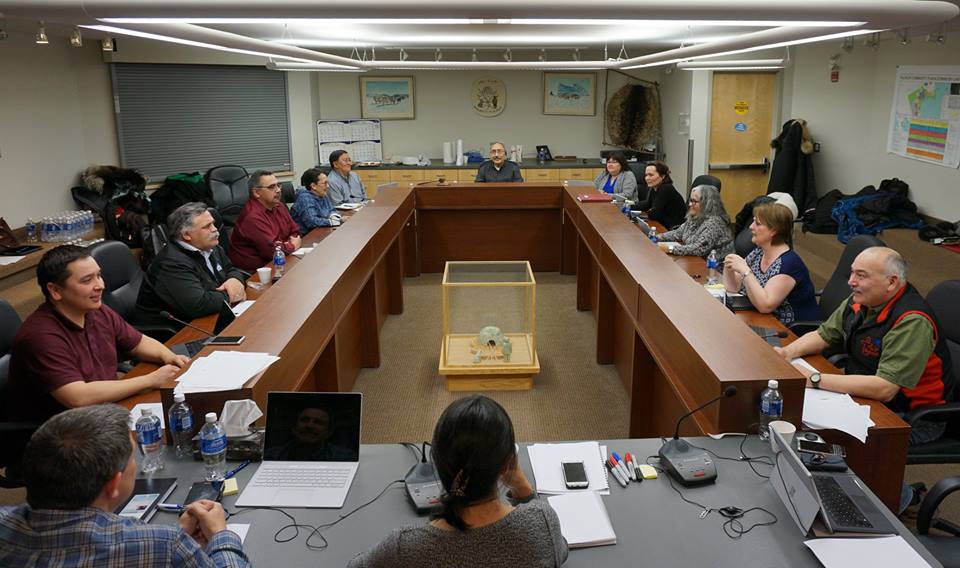 Nunavut’s cabinet ministers meet in Premier Paul Quassa’s hometown of Igloolik last week to discuss priorities and themes for a new government mandate. Those ideas will now go to a full caucus retreat of elected members of the legislative assembly, slated for Feb. 19 to Feb. 23. The legislature’s winter sitting gets underway March 6. (PHOTO COURTESY OF GN) 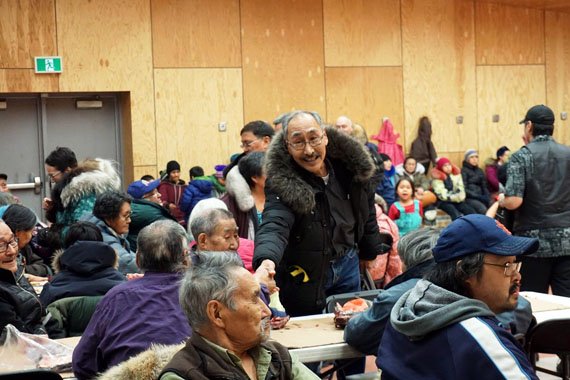 Premier Paul Quassa greets community members in Igloolik earlier this month at a feast following a cabinet retreat in his hometown. (PHOTO COURTESY OF GN)

Nunavut Premier Paul Quassa remains noncommittal about what his new government intends to do, opting to wait until after full caucus meetings take place next month in Pond Inlet, where MLAs will discuss an overarching mandate and strategy.

But the recently elected leader promises “action and not just talk” when that document is finally unveiled, which will chart a course of action for Nunavut’s fifth assembly.

That mandate will replace Sivumut Abluqta, a similar document put in place under the leadership of ex-Premier Peter Taptuna in 2014.

Quassa, who spoke by phone to Nunatsiaq News on Tuesday, Jan. 23, said the mandate will “reflect what we heard from Nunavummiut and the vision of the Nunavut Agreement.”

As a principal signatory of the Nunavut Agreement in 1993, Quassa said, “I have a pretty good idea what the vision was.”

“It has come to a point where we’ve said we don’t want to be a government that’s just repeating what has been done in the past,” he added.

But participants at the meeting called on the premier to draft a mandate effective enough in scope for use by future governments, as well as addressing concerns voiced by Nunavummiut during the election, he said.

The issues identified in that meeting will be presented to all members of the legislative assembly during the full caucus retreat in Pond Inlet in February.

“This collaboration effort is to ensure that every member of the legislation assembly has a say and stake in the work ahead,” Quassa said.

But some deadlines are fast approaching, such as the July 1 legalization of cannabis planned by the federal government this year.

Quassa said he’s confident the territory will have its own legislation in place ahead of that date.

But there are only two sittings of the legislature scheduled to take place between now and the summer deadline.

“We don’t have any options but to deal with it and certainly this government is working and we will be bringing it up to the full caucus in Pond Inlet,” he said.

More than three-quarters of respondents in a territorial survey last year said they were in favour of cannabis legalization in Nunavut, but are split over how the substance should be controlled and who can sell it.

Other legislation, like extensive amendments to Nunavut’s Education Act and Corrections Act, were abandoned in a half-baked state at assembly standing committees before the previous government wound down its term.

Before the election, Quassa promoted the failed Education Act amendments as a minister during the last government, but did not specifically comment on whether he would push to continue those reforms.

Those issues will be brought up with MLAs during the Pond Inlet meeting, he said.

“I don’t think this government will forget what has happened in the past. It gives us a clear directive with how to deal with things,” Quassa said.

Quassa added that his new cabinet is fully bilingual for the first time in the history of the territory, and that last week’s cabinet retreat in Igloolik was conducted entirely in Inuktitut.

“It is a very good representation of Nunavummiut and I look forward to be productive and very outgoing for the benefit of all Nunavummiut,” he said.

The assembly’s full caucus retreat is scheduled for Feb. 19 to Feb. 23 in Pond Inlet. The first sitting of Nunavut’s fifth assembly is scheduled to get started March 6 and wrap up March 20.

Uqqumiut MLA Pauloosie Keyootak, who was barred from taking his seat as MLA due to outstanding financial disclosures, has been allowed to resume duties as an elected member, the clerk of the legislative assembly, John Quirke, confirmed on Jan. 23.