“I continue to believe that education is the single most effective way to improve lives and reduce poverty.” 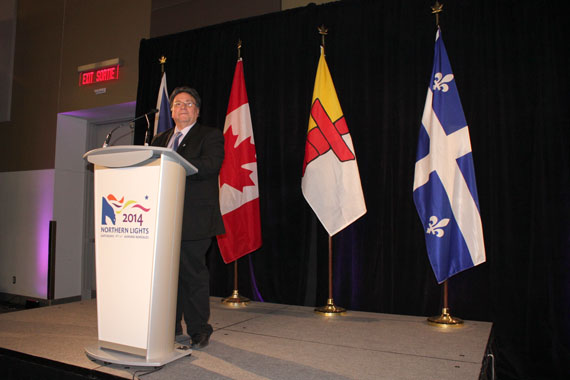 Nunavut Premier Peter Taptuna says he wants to make a “pan-territorial training strategy” a priority of Nunavut’s fourth legislature to address Nunavut’s skills deficit, but he’ll need the support of his cabinet colleagues to make that happen. (PHOTO BY LISA GREGOIRE)

OTTAWA — Nunavut Premier Peter Taptuna says Nunavut is on the brink of an economic boom, but Inuit won’t benefit unless the territory makes training and education its top priority.

Speaking to a large, lunchtime crowd attending the Northern Lights conference and trade show at Ottawa’s downtown “glass egg” convention centre, Jan. 30, Taptuna listed off the many statistics and studies that predict growth is coming to the mining, fishery and tourism sectors.

“In the early stages of our new government, we have the opportunity to re-evaluate our education system and determine what’s working and what needs improvement,” Taptuna said.

“I continue to believe that education is the single most effective way to improve lives and reduce poverty.”

They are Nunavut’s future, he said. And they deserve to benefit from the economic development that will soon gain momentum.

Infrastructure construction projects are coming down the pipe within the next few years, he said, citing the Iqaluit airport, the Mary River iron mine in north Baffin and Agnico-Eagle’s Meliadine gold mine in the Kivalliq as examples.

Coupled with other potential projects such as Peregrine’s Chidliak diamond mine near Iqaluit, Sabina’s Back River and Hackett River projects in the Kitikmeot, and Areva’s Kiggavik uranium mine in the Kivalliq, Nunavut will need thousands of tradespeople to work in mining and construction.

But his economic outlook might be rosier than others. In order for these projects to go forward, the market for gold, diamonds and iron will need to improve.

Agnico-Eagle, for instance, actually scaled back its exploration program at Meliadine last summer.

While permitting and licensing activities will continue, the company said future work beyond 2014 “will be subject to board approval and prevailing market conditions.”

Acknowledging briefly that market forces are a large and unknown variable in this equation, Taptuna said he is confident that mining and construction would form a large part of Nunavut’s future economy and for that reason, he hoped to make a “pan-territorial training strategy,” a priority for Nunavut’s fourth legislature.

“An educated population leads to healthier communities, reduced dependence on government support. We all know that,” he said.

“An employed population also gives us an ability to direct limited funds toward even more strategic infrastructure projects.”

Education, economic development and employment have always been Taptuna’s priorities, since winning the leadership vote among his elected colleagues and becoming premier in November.

But he will need the support of his cabinet colleagues to make those priorities reality.

Nunavut cabinet members will sit down next week for a retreat, Taptuna said in an interview after his speech, in order to flesh out a government mandate, the details of which will be revealed during the next sitting of the Nunavut legislature, which begins March 6.

Taptuna briefly mentioned devolution in his 15-minute speech, saying he was encouraged by the federal government’s commitment to start negotiating a framework for devolving decision-making powers over land and resource development to Nunavut.

“Devolution essentially allows us to increase control over our own destiny including resource royalties on crown lands for stability. We envision a day when we can become an even greater contributor to the national economy of Canada.”

Mark Thompson, director of devolution for the Nunavut government, said during an interview earlier that they hope to start hammering out an agreement-in-principal this year once federal negotiators complete the devolution program currently unfolding in the Northwest Territories.