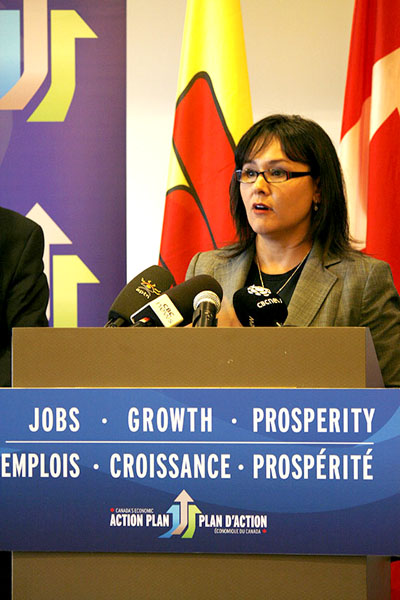 Nunavut MP Leona Aglukkaq, the minister responsible for the Canadian Northern Economic Development Agency, at an infrastructure announcement in 2012. She said she will “work closely” with territorial government to decided which projects will get funding from the New Building Canada Plan. (FILE PHOTO)

Nunavut communities will benefit from $419 million in federal funding for infrastructure over the next 10 years, the federal government announced Feb. 13.

The funds are part of a $53 billion amount that the government will invest in infrastructure across the country under the New Building Canada Plan.

Prime Minister Stephen Harper announced the plan in as a new version of the original Building Canada Plan, launched in 2007.

The original Building Canada Plan provided billions in funding for infrastructure across the country over seven years.

“The new plan will build on the success of the original plan,” the prime minister’s office announced in a Feb. 13 news release from Gormley, Ont., a village just north of Toronto.

The new plan is expected to launch this spring, according to the release. Amounts to be allocated to Nunavut and all other provinces and territories “will support projects that focus on economic growth, job creation and productivity, including building roads, bridges, subways, commuter rail and other public infrastructure,” the release states.

“This is very good, in that it will give predictable, allocated funding for the (Nunavut) territorial government to be able to plan long-term,” Nunavut MP Leona Aglukkaq told Nunatsiaq News Feb. 13.

The fund will be allocated to specific projects in Nunavut, to be decided by the territorial and federal governments.

The $419 million between 2014 and 2024 adds to some $1.5 billion that the Government of Nunavut receives from the federal government annually, the MP said.

“I’m looking forward to allocating where this resource will be spent,” Aglukkaq said.

Canada’s other two territories will receive similar amounts: $421 million will go to the Northwest Territories and $420 million to Yukon.

The federal government highlighted that Nunavut, with all other provinces and territories, also stands to benefit from:

• $4 billion available “for projects of national significance;”
• $1.25 billion in funding for public-private partnership projects;
• $10.4 billion for municipal infrastructure though their GST rebate.