“There’s been quite a positive response” 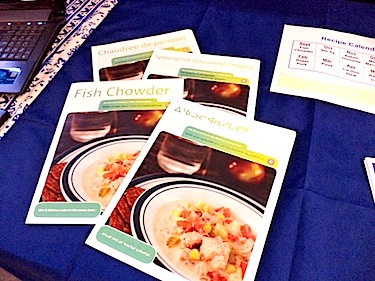 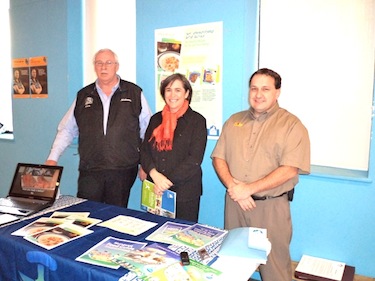 Iqaluit Northmart store manager Rick McDougall, the Government of Nunavut’s nutritionist Jennifer Wakegijig, and Arctic Co-operatives Ltd. regional manager Stephane Daigle unveil the recipe pamphlets for 10 new recipes being distributed to Nunavut communities. The goal of the recipes is to teach people how to make healthy choices at the checkout counter at grocery stores and co-ops. (PHOTO BY SAMANTHA DAWSON)

That’s the message the health and social services department of the Government of Nunavut sent out to all Nunavut communities, which have received 10 new recipes for healthy meals.

Every month, for the next 10 months, a new recipe will be featured in stores, including Arctic Ventures and North Mart in Iqaluit.

That means stores will put the recipes in flyers, put items on sale and let people taste test the foods.

The goal: to teach people cooking skills and to help people find ways to cook confidently with store-bought foods.

“A variety of skills are included in here that people have told us they need,” she said.

Nunavut residents want to learn how to roast meat, such as whole chickens.

So, there’s a picture of every step of the recipe in step-by-step booklets “to try to really make people feel confident that they can do this.”

The recipes include big colourful pictures, the amount of servings, how long the food takes to prepare and cook and food safety tips.

There are also food safety tips indicating the importance of proper hand washing.

“Sometimes we learn that people aren’t sure how to cut up certain vegetables or which parts you eat and which part you throw away. We’re hoping that through seeing these recipes and trying them out, people will start to gain confidence in those skills,” Wakegijig said.

The need for the recipes is based on results from the Inuit health survey, which found that Nunavummiut make poor choices when buying food at the store.

“It’s the choices that people are making at the store that are sometimes causing health problems,” Wakegijig said.

This includes drinking two to four cans of pop a day and eating “quite a bit of highly refined processed foods.”

If one thing is clear, it’s that people in Nunavut also want access to more country food.

“Several of [the recipes] feature country food prominently or they say you could make this recipe with beef or caribou,” Wakegijig said.

These were developed “in Nunavut kitchens,” she said.

A DVD, “Cooking Healthy Food” by Rebecca Veevee has also been sent to community health representatives. It details each recipe and shows how to make them.

Stores may decide to offer discounts, but, in any event, the recipes will be promoted.

However, a single serving of one of these recipes is under five dollars which would cost less than a prepared sandwich, “which we know people consume a lot of.”

The project also attempts to teach people about food budgeting.

“We’re trying to encourage people to see both the health benefits and some of the cost savings that can be achieved by nutritious foods and preparing them at home,” Wakegijig said.

Rick McDougall of the North West Co., the Northmart store manager in Iqaluit, who has tried the fish chowder, said the recipes are simple and should be a success.

“What I really like about the recipes is that they’re so simplified, some of the people have already tried them and say they could not believe something simple could taste so good,” said McDougall, adding that targeting the youth is important.

So far, the fish chowder recipe has been popular.

“[The response] been overwhelming so far, every month we’re going to feature [a recipe], and there’ll be somebody there when each new recipe comes out to explain it,” he said.

“This will definitely help us relate better to the communities,” he said.

The recipes are available online.

Copies of the “Cooking Healthy Food” DVD will be sent to community libraries though the project, funded by Health Canada and Nutrition North Canada.