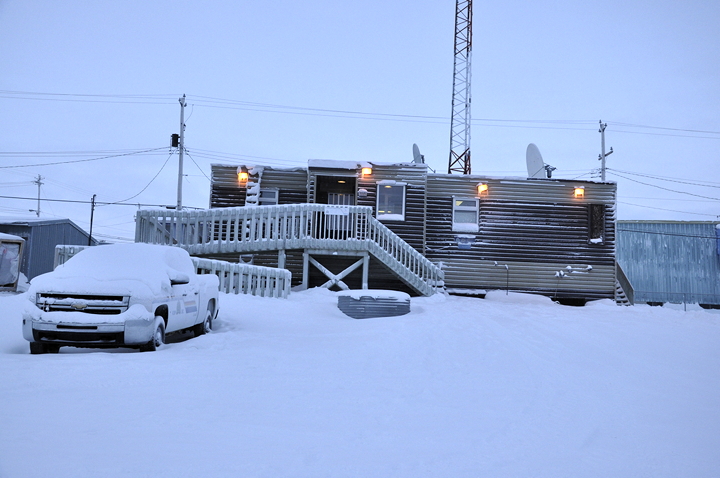 The RCMP detachment in Igloolik. Members of the coroner’s jury, seeking answers into the death of Solomon Uyarasuk in police cells there two years ago, were given a tour of the detachment Nov. 27. (PHOTO BY THOMAS ROHNER)

IGLOOLIK — Before Solomon Uyarasuk hung himself from the meal slot of a prison door in the Igloolik RCMP detachment two years ago, RCMP members in that community, and their bosses in Iqaluit, knew the slot’s broken latch posed a suicide risk.

That’s according to one of two RCMP members who arrested Uyarasuk in the early morning hours of Sept. 23, 2012.

The police officers testified at a coroner’s inquest in Igloolik Nov. 26, the third day of what is expected to be a week-long hearing.

Both officers, who had been providing relief work in Igloolik at the time of Uyarasuk’s death, appeared via videoconference from Ontario, where they live, as the inquest shifted from the old community hall to a boardroom in the local Government of Nunavut building.

A coroner’s inquest, automatically triggered when someone dies in police custody, is a public hearing held to determine the circumstances surrounding a death and to make recommendations on how to avoid similar deaths in the future.

A six-person jury, comprised of local community members, is charged with those two tasks.

The latch on the slot — through which prisoners receive food — wouldn’t stay closed, said Const. Martin Noel, acting detachment commander at the time of Uyarasuk’s death. The open latch allowed Uyarasuk to jam his nylon belt into the corner of the slot.

Noel testified that he emailed his RCMP superiors about the broken latch just a few days before Uyarasuk’s death, pointing out the suicide risk it posed.

He said he did this on orders from the detachment commander who he had temporarily replaced. He did not say why the commander he was relieving did not send that email himself.

Mark Mossey, the lawyer representing Uyarasuk’s family, asked Noel if he was instructed to keep the slots in mind if the cells were used.

Noel, who has three years of experience as an RCMP officer in Nunavut providing relief command in 11 different communities, replied that every detachment has a list of things to remember.

“Many detachments in the North, the latches won’t close,” he said.

Mossey also asked why Noel would leave a prisoner alone with a belt in a cell known to pose a suicide risk, especially after that prisoner had substantially injured himself in the process of being arrested.

“There was nothing he said or displayed at the time that made me think he was suicidal,” Noel replied.

On the first two days of the inquest, the jury heard testimony from an external police investigation into the events surrounding Uyarasuk’s death, as well as from the forensic pathologist who conducted the autopsy on Uyarasuk.

Both of those testimonies supported the local RCMP’s account of Uyarasuk’s “violent” and “aggressive” behaviour that night during his arrest.

Those officers testified that Uyarasuk had banged his head repeatedly against the plexiglass-and-metal partition separating the front and back seats of the RCMP truck used to bring Uyarasuk to the detachment following his arrest.

The self-inflicted injuries left Uyarasuk with a gash on his forehead and his face covered in blood.

According to testimony from Phillip Qanatsiaq, a friend who drank with Uyarasuk that night, and a neighbour who called in a noise complaint on the two men, RCMP members arrived at Uyarasuk’s apartment sometime after 5 a.m. that morning.

Noel said that Uyarasuk and Qanatsiaq were initially cooperative, though obviously drunk, when he and the other attending officer, Sgt. Greg Murphy, entered Uyarasuk’s apartment.

But Uyarasuk became enraged, Noel testified, after the officer mistakenly recorded an incorrect date of birth while taking down Uyarasuk’s information.

His partner described the same behaviour. “He was walking around with his chest out, and his fists clenched, screaming,” Murphy testified.

Qanatsiaq moved between his friend and the officers, trying to calm Uyarasuk down, but Uyarasuk turned on Qanatsiaq and, according to both officers, assaulted his friend.

That’s when they arrested Uyarasuk, and took him — shirtless and shoeless — outside to the RCMP truck.

Shortly before 6 a.m., both officers testified, Uyarasuk was led to a cell in the Igloolik detachment, protesting, and screaming all the while: “I don’t want to get arrested” and “Please don’t beat me… please don’t bash my head into the concrete floor like last time.”

The officers pinned Uyarasuk to the ground in the cell, removed his handcuffs — because they were riding too far up his forearm, Murphy said—and patted Uyarasuk down, removing the contents of his pockets.

That’s when they first noticed Uyarasuk was wearing a belt.

The belt was tied with a knot, Noel said, and the officers took turns restraining Uyarasuk while the other attempted to untie the knot. Their attempts failed, however, and because Uyarasuk continued to scream and resist their efforts, they backed out of the cell to let Uyarasuk calm down.

“I believe it’s RCMP policy not to leave belts on prisoners, is that correct?” Mossey asked Murphy.

Shortly after 6 a.m., Noel checked on Uyarasuk, conveying to Murphy that their prisoner, now naked, had calmed down, was no longer screaming and seemed to be exhausted, lying down against the wall of the cell.

Murphy then left to pick up a nurse at the health centre in order to get Uyarasuk’s wounds assessed. That was at 6:06 a.m., Noel testified.

While Murphy was absent, Noel sat in the administrative section of the detachment, away from the cells.

When Noel led his partner and the nurse back to Uyarasuk’s cell, he discovered Uyarasuk hanging from his belt which was jammed into the broken meal slot.

More than a dozen members of Uyarasuk’s family were crowded into the boardroom Nov. 26 to hear the videoconference testimony in a room significantly smaller than the old community hall.

They took turns sitting on chairs and on the floor. Some of the women braided each other’s hair as they shared a case of pop. A youth played on an iPad in a corner.

The inquest continues Nov. 27. Cpl. Lorne Morrison, the RCMP officer who assumed the detachment’s command after Uyarasuk’s death, is expected to testify today.