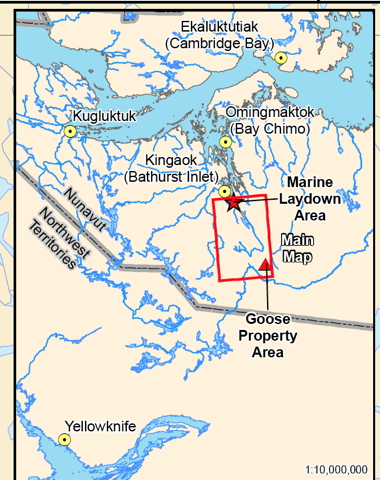 This map shows the location of Sabina’s proposed Back River gold mine in Nunavut’s Kitikmeot region. (FILE IMAGE)

The Nunavut Impact Review Board, federal and territorial agencies and Inuit organizations, along with Métis and Dene groups from the Northwest Territories will return to Cambridge Bay in late May for the regulator’s second public hearing on Sabina Gold and Silver Corp.’s Back River gold mine project.

The four days of technical hearings and community roundtables, scheduled between May 31 and June 3—at the request of the federal government—are meant to undertake a more vigorous review of the proposed gold project.

Following a four-year environmental screening and assessment process that included hearings and a community roundtable last April in Cambridge Bay, the NIRB moved to reject the project proposal on the grounds that its environmental and social impacts were too great to be managed.

In January 2017, Indigenous and Northern Affairs Canada sent the project’s final hearing report back to the NIRB, saying the project needed a more robust review before Nunavut could close the door on its potential development.

INAC said the report’s findings were “premature” and “deficient in respect to some ecosystemic issues.”

The response marked the first time in the NIRB’s 20-year history that a public hearing report had been sent back for a re-do.

The pits would operate for at least 10 years and involved filling, damming or draining lakes and streams and building a 157-km road from the mine to a seasonal port facility and tank farm in Bathurst Inlet.

The new round of technical hearings will focus on five issues, the NIRB said in a release this week: caribou and terrestrial wildlife, freshwater aquatic environment, marine environment, water quality, and climate and meteorology.

Sabina’s planned caribou protection measures came under heavy criticism during the first hearings and roundtable held last April, with the governments of Nunavut and the NWT saying the company needed to do more and act more quickly to protect barren ground caribou herds.

The new NIRB review will take place at Cambridge Bay’s Luke Novoligak Community Hall during the following dates and times:

Groups that took part in the NIRB’s previous public hearing on the Sabina project in April 2016 are not required to re-apply for intervenor status for the upcoming hearings.

But all parties must confirm their attendance by April 18, the NIRB said.

The deadline for all final written submissions is April 24.