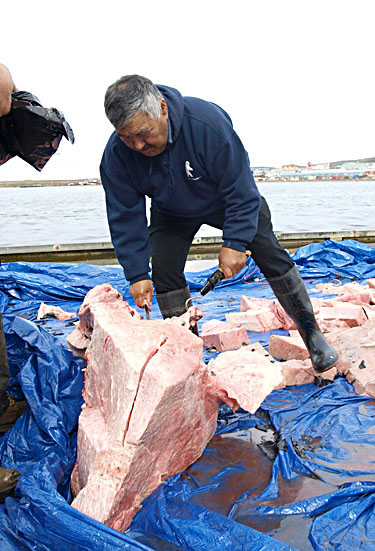 People in Iqaluit and throughout Nunavut are savouring an historic catch: for the first time in a century, Iqaluit hunters Aug. 15 landed a bowhead, a 14-metre-long whale, weighing in at more than 70 tonnes.

News of the successful hunt spread quickly around the city — from honking horns on Iqaluit’s streets to sending messages on social media.

Nunavut Tunngavik Inc. president Cathy Towntongie said she had “goosebumps” when she heard the news.

After whaling captains Solomon Awa and Pitseolak Alainga, accompanied by two dozen hunters, set off along Frobisher Bay the evening of Aug. 15, it took little more than an hour to spot the whale.

Crews then towed the huge whale back to Upirngivialuralak, about two and a half hours from Iqaluit by boat, for butchering.

The site was soon covered in pads of maktak, the skin and blubber which will eventually be distributed to Nunavummiut across the territory.

Although Towtongie’s home community of Rankin Inlet harvested its own bowhead in recent years, she said there was something special about the Iqaluit hunt.

“It’s so important for the Inuit to regain this whaling tradition,” she said. “But it was such a diverse group of people pulling together to make this happen.”

At an event in Edmonton, Nunavut MP Leona Aglukkaq said she bragged to her colleagues about the giant catch.

“It’s obvious, both from speaking with community members and watching footage on TV, that this historic event has brought a sense of pride and excitement to everyone who is fortunate enough to be a part of it,” Aglukkaq said in an Aug. 17 news release. “From elders to young children, this shared experience is a special memory that will be talked about for generations to come.”

A community celebration is expected to be held in Iqaluit once the whale has been butchered.

In the meantime, the federal department of fisheries and oceans sent technicians to the site to collect samples of the whale, which will help to determine the whale’s age and sex.

Bowhead whales can live up to 200 years.

Until recently, DFO scientists claimed there were only several hundred bowhead whales in eastern Arctic waters, preventing their harvest in Nunavut.

But in 2007, they upped that estimate to at least 5,000 and decided that a controlled hunt will not put the species in danger.

In 2009, the Nunavut Wildlife Management Board established a quote, or a total allowable take, of three whales per year over three years.

That means that each of Nunavut’s three regions has been able to harvest a whale in recent years, said Eric Kan, the DFO’s director for the Eastern Arctic.

“For the last three years, beneficiaries have been working with the management board to determine which communities get to harvest the whale,” he said.

Those communities develop a hunt plan, while DFO issues hunting licenses, which are good for a period of about two months.

In the next three to four weeks, Coral Harbour hunters will head out to hunt their own whale, while Kugaaruk’s hunt should be already underway, Kan said.

And Kugaaruk hunters hope to get lucky this year – although they were selected to harvest a whale in 2010, poor weather conditions prevented them from hunting one before their license expired.

Although Nunavik was permitted to harvest one bowhead this year, after successful hunts in 2008 and 2009, no hunt was coordinated for 2011 because “the hunt can be expensive and labour intensive,” Kan said.

But many hunters have called it the “opportunity of a lifetime,” expressing the hope that their children and grandchildren will get to take part of the Inuit tradition. 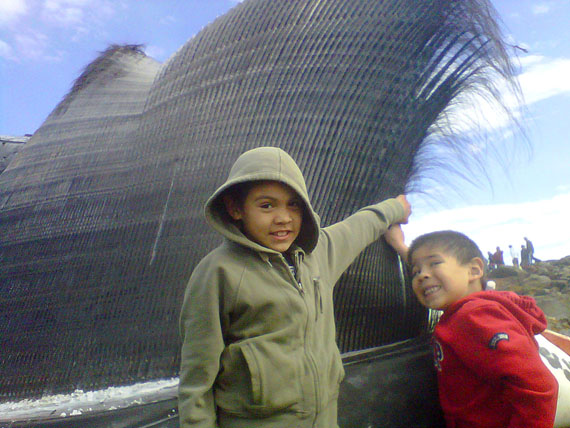 Young Simata and Michael Buscemi of Iqaluit admire a huge piece of baleen cut from a 46-foot bowhead whale that Iqaluit hunters caught Aug. 15 in Frobisher Bay. It’s the first time in roughly 100 years that hunters from the Iqaluit area have landed a bowhead whale. (PHOTO COURTESY OF FRANCO BUSCEMI)