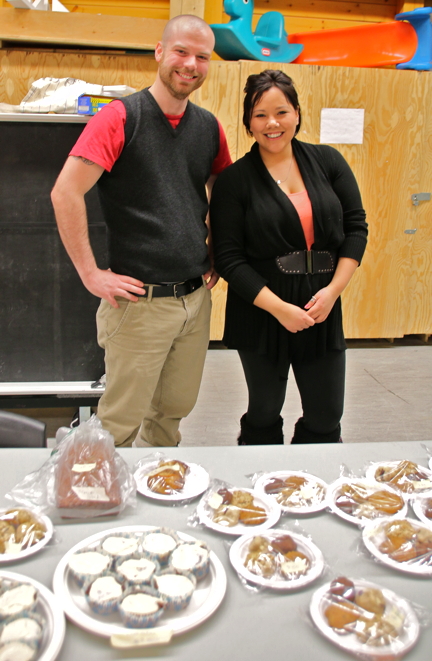 The generous residents of Cambridge Bay have done it again.

Organizers of a coffeehouse fundraiser, held March 21 in this western Nunavut community, reported they raised $1,400 for the Wellness Centre’s food bank.

“I think how people came together to make this happen was the biggest success,” said Christine Aye, one of the event’s organizers. “So many people gave up their Saturday afternoon to help out a good cause.”

About 15 people volunteered to help run the event which included live music and a sale of homemade baked goods at the Luke Novoligak community hall.

“I know a number of families struggling with food resources,” said George Garrett, who volunteered to help sell food. “I want to do everything I can to make sure everyone in town has food on their table.”

Those baked goodies sold out within the first half hour of the two-hour event.

“I’m really happy about that,” said Aye. “I couldn’t have asked for a better turn out.”

All products, including specialty coffees, pies, cupcakes, cookies, chili and bannock, were all donated by people in the western Kitikmeot town.

On top of that, people brought non-perishable food items to go directly to the food bank along with money to donate.

The success is admirable considering it may not have happened at all.

When the original organizer, Angela Philips, had to step aside at the last minute, Aye thought the event would have to be cancelled.

But Aye and her friend Gloria Song stepped up to the plate and took over to make sure the event would go on for the benefit of hungry local families.

“I think it went really smooth though because so many people were helping us,” said Aye. “People volunteered their time, people donated goods, people came to help set up and then everybody who came out to support us.”

And community members who attended say they enjoyed themselves.

Aye and Song provided the live performances along with guitarist Talia Maksagak. An open-microphone portion of the event gave local musicians an opportunity to perform in front of about 40 people.

Organizers are pleased with how it unfolded and are already looking forward to the next one.

“It really means a lot to me,” said Song. “I was happy to take over. There a lot of hungry families in town and it’s a good cause to try and help them.”