Nunavut has lowest education levels in Canada, and lags among OECD countries 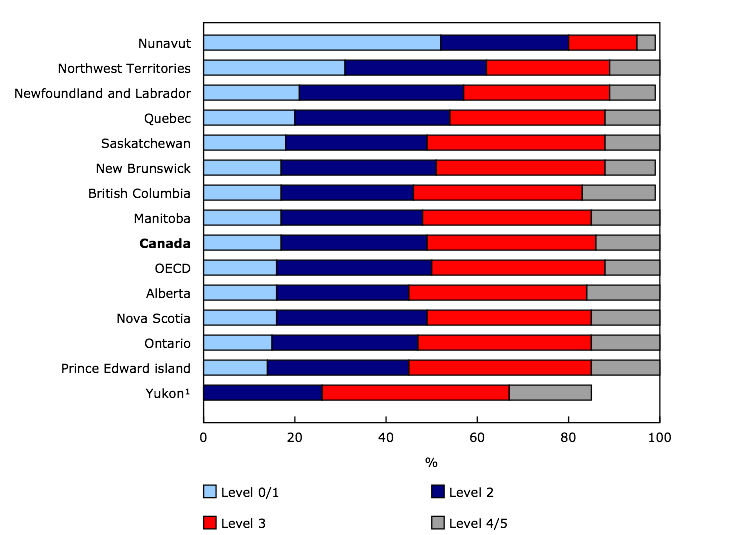 This graph shows the distribution of provincial and territorial literacy proficiency levels of 25- to 64-year-olds in 2012. Proficiency in literacy was measured on a continuous range and then broken down into five levels, with “1” being the lowest and “5” the highest. As seen above, Nunavut has nearly triple the number of people reading at the lowest level (proportionately) compared to the OECD average, and less than half the number reading at the highest two levels. Level 0/1 figures for Yukon were deemed too unreliable to publish. (STATISTICS CANADA/OECD)

A new study comparing education levels within Canada to other countries in the Organization for Economic Co-operation and Development shows what most Nunavummiut already know: Nunavut lags far behind the rest of Canada and many other developed countries in education levels.

The study, published Dec. 15 by Statistics Canada, is entitled, “Education Indicators in Canada: An International Perspective, 2014.”

The Organization for Economic Co-operation and Development, founded in 1961, is an organization of more than 30 countries set up to promote international trade and to share policies and democratic goals among its members.

The member countries generally have a high quality of life, high-income economies and are considered “developed” countries.

But education statistics for Nunavut starkly contrast with those in the rest of Canada and do not rank well compared to countries within the OECD.

In 2012, for example, about 90 per cent of all Canadians between 25 and 64 years old had a high school education —15 per cent higher than the report’s average of 75 per cent.

In Nunavut, though, only 57 per cent of those in the same age group had completed high school. The Canadian jurisdiction with the next-lowest high school education level, the Northwest Territories, sits at 81 per cent, the report said.

And Nunavut fares even worse in a comparison of post-secondary education — college or university levels — both within Canada and with other OECD countries.

Canada ranked second among OECD countries with 53 per cent of its citizens between 25 and 64 years old having completed some form of college or university education.

Only 31 per cent of Nunavummiut in the same age group have the same level of education, which is lower than two-thirds of all OECD countries.

When it comes to employment, education levels matter, the report said.

“Higher levels of education are generally linked to improved employment prospects,” it said.

Canadian employment rates in 2012 for adults without a high school education, for example, was 56 per cent, the report said. With a college or university education, however, the employment rate in Canada for the same age group grows to 82 per cent.

The report also found that Nunavut’s government is spending more money per student than any other Canadian jurisdiction, relative to its economic output.

This report comes on the heels of another StatsCan report released in November, which found that Nunavut’s education officials are hiring more educators but achieving lower enrollment and graduation numbers.

But no firm commitments or plans have been made, despite a $5-million donation by the mining firm Agnico Eagle Ltd. towards an Arctic university.