Next step: a feasibility study for a Napaaqtulik territorial park 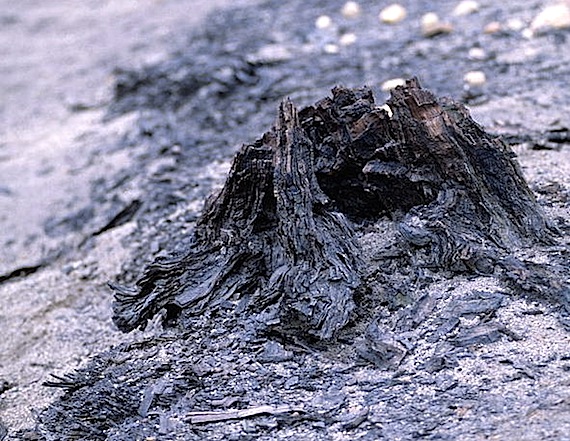 Visitors to Axel Heiberg’s fossil forest can see row after row of 50-million-year-old mummified stumps like this one, which lie exposed on the slopes of the Geodetic Hills. The Government of Nunavut plans to conduct a feasibility study next year on the creation of a territorial park to help protect the fossil forest. (PHOTO COURTESY OF ANSGAR WALK)

Nunavut wants to spend another $100,000 to develop a territorial park on Axel Heiberg Island — the first step to someday seeing its unique fossil forest gain protection as a World Natural Heritage Site.

The creation of a Napaaqtulik territorial park (“where there are trees” in Inuktitut) would help protect the fossil forest which grew on this High Arctic island about 50 million years ago.

During that warmer, ancient time, a forest of towering trees thrived, then died back, and was buried under the cold, sandy soil of the Geodetic Hills.

That is, until 1985, when a Canadian Geographical Survey team spotted the rows of ancient mummified trunks which had been swept clean by erosion.

Since then, these remnants of a much warmer polar past have remained unprotected from visitors.

Last year, Nunavut’s environment minister Daniel Shewchuk told the Nunavut legislature’s committee of the whole that his department was studying whether to make the fossil forest into a park.

More than 10 years have already passed since the idea of protecting the fossil forest first came up, but any action was postponed until the Inuit impact and benefits agreement was signed off for the first batch of territorial parks.

Shewchuk warned in 2010 that it could take at least 10 more years before the fossil forest becomes a territorial park.

Shewchuk had the same message this year, during the Oct. 26 session of the committee of the whole.

“It takes time to develop a park. There are many, many steps we have to go through, and it could be a costly endeavour,” he said.

About $300,000 has already gone into various studies on the park.

With this year’s money, the department plans to conduct a feasibility study for Napaaqtulik.

“That is absolutely going to include the consultation of Grise Fiord and the communities [in the High Arctic],” Shewchuk said. “We don’t even know if there is going to be a park at this time, because that’s what a feasibility study is all about; is to communicate and consult with the people and see what their concerns are.”

Years ago Dave Gratton, a conservator with the Canadian Conservation Institute, called for the the fossil forest to be included within the boundaries of Quttinirpaaq National Park or declared a World Heritage Site.

“Only political action is going to save this site,” Gratton said.

But the forest was too far away from the headquarters in Tanquary Fiord.

According to the 1972 United Nations Convention on the protection of the world’s cultural and natural heritage, the fossil forest could qualify as a “natural property.”

But any application to become a World Natural Heritage Site first requires national legislation, and the nominating country must also demonstrate its financial ability to protect the property.

The creation of a territorial park around the fossil forest would be a move in the right direction.

Most of the trees that grew on the slopes of the Geodetic Hills were enormous Dawn Redwood, or Meta-Sequoia.

According to the size of the stumps and branches, which can still be seen today, this forest was tall, with trees reaching up to 35 metres in height. Some appear to have grown for 500 to 1,000 years.

While found at most other sites of the same age, similar forests have turned to coal or oil, but at the fossil forest on Axel Heiberg, plants and trees have still maintained their original form and composition.

Thanks to the fine sediment in which the forest grew, mineral solutions never filtered into the plants’ cells turning them into stone — as is the case for several other fossil forests in Nunavut’s High Arctic islands.

On Axel Heiberg trees and plants, preserved for thousands of millennia by the cold, dry Arctic climate, were only recently been exposed by erosion.

Once in the air, the fossils become extremely brittle, and any disturbance paves the way for damaging erosion of the site, which is often ravaged by violent windstorms that blow exposed fossils away.

Although the Greely expedition found fossil forests on Ellesmere Island in the late 1880s, the fossil forest on Axel Heiberg was only spotted 25 years ago.

Since then, it’s been studied by several research teams, dug up by a group of American scientists in 1999 and left unprotected.

Visits to the fossil forest occur regularly during the warmer months.

The fossil forest lies only a 20-minute hop by helicopter from the Canadian military base at nearby Eureka.

Every August, passengers from cruise ships arrive to tour the site.

Some visitors trample the fossils or take pieces of wood for souvenirs. Of more than 200 stumps that researchers have recorded in one section of the fossil forest, less than half that number may still remain.

At least four other similar sites which contain fossil forests are known to exist on Ellesmere Island and on Axel Heiberg. All are unprotected from visitors.