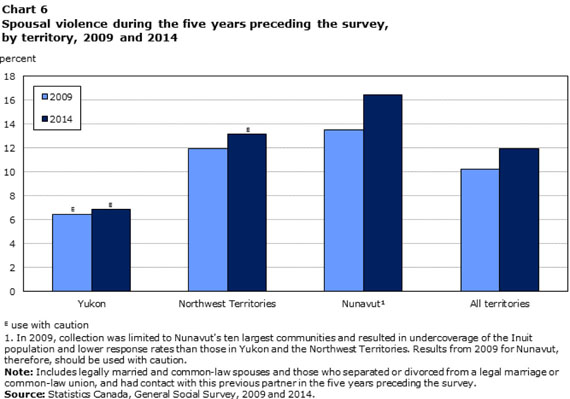 This graph from Statistics Canada shows that, of all three territories, the rate of victimization by family violence was highest in Nunavut in 2009 and 2014. StatsCan says, however, that their Nunavut figures for 2009 should be interpreted with caution, since only people living in the 10 largest communities were surveyed that year. (STATISTICS CANADA IMAGE)

Rates of spousal violence in Canada’s territories, including Nunavut, remain much higher than in the rest of the country, especially for Aboriginal residents, according to new data released April 27 by Statistics Canada.

The study, called Criminal Victimization in the Territories, 2014, reveals that about 12 per cent of residents in Nunavut, the Yukon and the Northwest Territories reported being victims of spousal violence between 2009 and 2014.

That’s compared to four per cent in the rest of Canada, StatsCan said.

About three-quarters of territorial residents who reported being abused by their partners are Aboriginal, the study said, while Aboriginal people only account for about half of the spousal population in the territories.

And a staggering 93 per cent of those who reported the most serious forms of spousal abuse — such as being beaten, choked or sexually abused — were of Aboriginal descent, StatsCan said.

The new data studied victimization rates in Canada’s territories for violent crimes — but not crimes that include death, such as murder — and non-violent crimes, such as property damage and theft in 2014.

While both violent and non-violent victimization rates in the territories dropped by about 30 per cent between 2009 and 2014, the rates remain nearly twice as high as elsewhere in Canada, StatsCan said.

And, according to the report, Nunavut residents reported the highest rate of victimization.

“Nunavut reported the highest rates of both violent and household victimization, both among the territories and nationally,” the report said.

But Nunavut residents also reported the lowest rate of property theft among the territories, the study said.

Victims reporting crime were more likely to live in a larger territorial community, of at least 2,000 residents: “Nearly one-third of residents in these larger communities reported being the victim of at least one of the crimes measured.”

That compares to about one in five residents from smaller communities, StatsCan said.

“This difference was mainly attributable to higher rates of theft of personal property reported in the larger communities,” said the report.

The study also said that the overall rate of violent victimization was more than 60 per cent higher for Aboriginal residents of the territories.

But Aboriginal identity was not associated with the risk of violent victimization when other risk factors were taken into consideration, StatsCan said.

“Numerous other factors were found to be associated with the risk of violent victimization in the territories, including gender, age, disability, history of childhood victimization, history of homelessness, drug use, social cohesion in the neighbourhood and personal income.”