“It’s the perfect classroom right there” 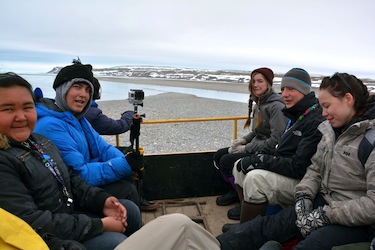 Youth participants head out for a day of adventure during a youth leadership expedition to Somerset Island in early July. (PHOTO COURTESY OF PAUL SOKOLOFF) 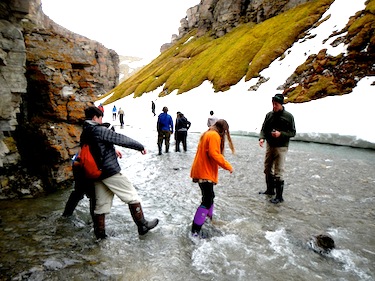 Dr. Ewan Affleck, far right, an expedition leader from Yellowknife, who once practiced medicine in Nunavik, leads participants on a hike through Gull Canyon. Affleck’s daughter Anika participated in the 12-day expedition on Somerset Island. (PHOTO COURTESY OF PAUL SOKOLOFF) 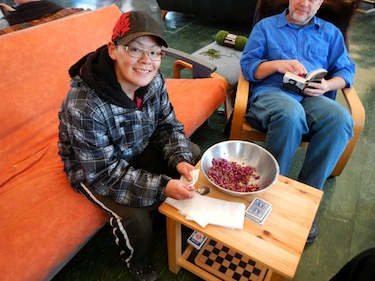 OTTAWA — Even scientists from the Canadian Museum of Nature can learn a thing or two from Nunavut teenagers.

Paul Sokoloff, a botanist and research assistant with the Ottawa-based museum, said he was delighted to learn during a recent scientist-in-residence excursion to Somerset Island that you can eat purple saxifrage, Nunavut’s territorial flower.

That tip came courtesy of 17-year-old Alicia Manik of Resolute Bay who, along with eight other youth — six from Nunavut, one from Yellowknife and one from New York state — was participating in Arctic Watch Lodge’s Steve Amarualik Youth Leadership Expedition July 1 to July 12, on Somerset Island.

“Since I was a little girl, we go out on the land every year and we bring them home and eat them,” said Manik, now back in Resolute. “We put maple syrup on them or whipped cream.”

She and the other youth were out on a plant and fossil hike when Sokoloff spotted a huge purple saxifrage roughly three quarters of a metre in diameter. After he explained to the group how hardy and widespread the plant was, Manik added that you could eat it.

She then proceeded to harvest the plant and when they got back to the lodge, she prepared a bowl of blossoms with syrup and dished it out to willing takers. Sokoloff said it was delicious.

“She’s not shy about saying this is my home, I know about it,” said Sokoloff, from his museum office in Ottawa. “She had a really good time on the trip. She has a bright future ahead of her.”

According to the Government of Nunavut website, the plant can be made into tea and is also used to help relieve stomach ailments.

Sokoloff was only present for six of the expedition’s 12 days but said during that time, the young participants were keen and engaged, challenging themselves, honing leadership skills and learning to work as a team.

According to the Arctic Watch website, the annual expedition, named after a former staff member from Resolute, focuses on leadership and skills training through experiences backpacking, kayaking, rafting, exploring, participating in research, studying the impacts of climate change and guiding.

Sokoloff was invited to offer the science and research component for this year’s youth expedition so he set up a lab in the Lodge’s great room to examine and preserve plant specimens.

The Canadian Museum of Nature is currently compiling a new Arctic flora, a snapshot of what’s growing and where in the Arctic right now, so future scientists can gauge how northern plants, lichens and mosses are affected by the changing climate.

Students who helped Sokoloff collect specimens will have their names attached to those specimens when they are labelled and stored at the museum’s national herbarium. Sokoloff brought back 145 plant collections from the trip.

“It’s a real honour and a privilege to be able to do this on behalf of the museum,” he said. “To be working as an educator for the kids made it a phenomenal experience. It’s the perfect classroom right there.”

Aside from learning about earth sciences and participating in challenging outdoor recreation, the students were also exposed to different occupations at the lodge such as guiding and food preparation.

Manik said she talked to the lodge’s chef about culinary arts schools because that’s what she wants to get into. She hopes to graduate this fall from Qarmartalik School in Resolute and eventually go to Ottawa’s Algonquin College.

She said she really enjoyed her experience on Somerset Island and would definitely recommend it to friends.

The excursion was a great opportunity for northern students, Sokoloff said, some of whom seldom leave their home communities. He said he enjoyed watching them interact in the evenings, knitting and beading, playing cards and editing digital videos of their trips on the land.

It was also gratifying to bring bright young minds into the project team assembling the Arctic flora. “We’re Canada’s museum of natural history,” he said. “If the people can’t come to us, we’ll go to the people.”

“Steve worked with us at Arctic Watch for five years and, during that time, he blossomed into an intelligent, athletic young man who loved life and speed,” says the Arctic Watch website.

“Steve serves as a reminder to the participants of the qualities that the program helps them develop. With Steve Amarualik as a role model for the goals of the program—someone to whom Inuit youth can relate — we hope that his example will also help young people in Resolute Bay develop the life skills they need to deal with the challenges of life as an Aboriginal youth in the Canadian Arctic and build the kind of lasting relationships that will provide them confidence and enhanced self-esteem.”