“What can we do in five years realistically and completely” 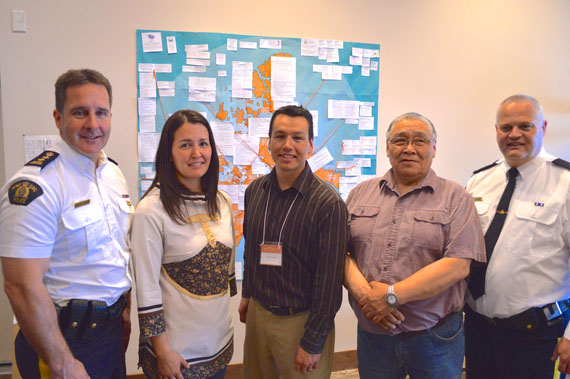 The group, rebranded as Atausiuqatigiingniq Inuusirmi or “United For Life,” is a partnership between the Government of Nunavut, Nunavut Tunngavik Inc., the RCMP and the Embrace Life Council, whose goal is to reduce suicide in the territory.

The group’s previous action plan, released in 2011, crumbled under scrutiny during a special coroner’s inquest into suicide in Nunavut, held in September 2015 in Iqaluit.

Shortly after, in October, the GN declared suicide in Nunavut “a crisis.”

“I think there was a lot of stuff in the previous action plan that wasn’t completely measurable and wasn’t realistic to do in that time frame,” RCMP media spokesperson David Lawson told media at the summit’s conclusion May 6.

“So what we’re looking to bring forward now, is what can we do in five years realistically and completely.”

More than 100 participants from across Nunavut visited Iqaluit for the summit. They participated in workshops and discussed the territory’s alarming suicide rate.

“We learned a lot at the workshops,” said NTI vice president James Eetoolook, who participated in the summit.

“[We learned] what to do in the future when we draw up the action plan. People have a lot of ideas. It gave us very good information about preventing a suicide, when we compile it together it can create a good strategy.”

By holding the summit, the group fulfilled one of the more than 30 recommendations made by special coroner’s inquest jury.

In the future, the group said it will gather the ideas brought to the summit and present that information back to stakeholders.

“That’s our next immediate step and from there, we’ll be working on the long-term action plan,” said Karen Kabloona, the GN’s associate deputy minister for quality of life.

“Some of the things are developing now, the RCMP is collecting data,” Kabloona said.

Later this year, the GN will introduce a mental health epidemiologist tasked with analyzing the patterns, causes and effects of suicide, Kabloona said.

That includes the prevalence of depression in Nunavut, trauma, medication and existing mental illnesses which can influence suicidal thoughts.

“They will be compiling a lot of the data we need for a long term evaluation,” she said.

“Its not just one causal factor, it’s a lot of things that come to play,” he said.