“Our need is great but our resources are far too few”

By COURTNEY EDGAR AND SARAH ROGERS 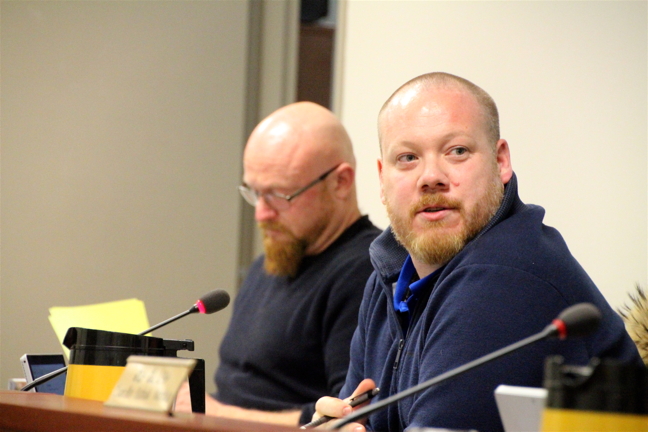 Kyle Sheppard, an Iqaluit city councillor, says Nunavut’s suicide epidemic is a public health emergency. He’s calling on the federal government “to put boots on the ground in any Nunavut community that requests it.” (FILE PHOTO)

In the wake of the recent suicides of two young men, an Iqaluit city councillor is demanding action from both the federal and territorial governments to respond to what he calls an ongoing crisis in Nunavut.

“Suicide is a public health emergency in Nunavut and not enough is being done to stem the tide,” said Iqaluit councillor Kyle Sheppard in a statement he read to Tuesday night’s city council meeting.

“There are action plans in various stages of development and lip service paid to the crisis each time another is lost. But nothing changes. We move on as a community, or seemingly so, perhaps compartmentalizing the loss until the inevitable next one.”

All Nunavummiut have been impacted by this epidemic and there needs to be a stronger response, Sheppard said.

This far into 2018, Nunavut’s Coroner’s Service said there have already been 16 suicides throughout Nunavut, all of them completed by men.

The agency said the ages of the deceased men range between 15 and 46 years.

Sheppard called on the federal government, including its territorial representatives MP Hunter Tootoo and Senator Dennis Patterson, “to put boots on the ground in any Nunavut community that requests it to end the inexcusable wait times Nunavummiut face when they seek mental health help.”

“Even those who ask for help don’t get it today in any sort of reasonable time-frame with wait times of several months and even up to a year in many cases,” Sheppard said. “Our need is great but our resources are far too few.”

Sheppard acknowledged that health care is under territorial jurisdiction, but said the Government of Nunavut has shown no ability to provide the required resources to “put a dent in” Nunavut’s suicide crisis.

Still, Sheppard called on Nunavut MLAs to ensure there are full-time, qualified counsellors who specialize in intervention and detecting early warning signs available at every school in Nunavut—before students return to school at the end of the summer.

He also wants the territory’s schools to incorporate more suicide prevention education in the classroom, like teaching students coping skills and how to ask for help when they need it.

For older students, Sheppard recommended the GN create and promote post-secondary opportunities for students to work in the field of mental health care.

“For too many of my friends and family, it is already too late,” he said. “Let’s act now before it is too late for someone else.”

Kim Masson, executive director of the Embrace Life Council, said that although her organization is not a front-line service provider, it is “working incredibly hard” to help Nunavummiut access the programs and services.

That includes delivering its “After a Suicide” toolkit to affected families and high school students in Iqaluit this week, as well as to grieving relatives in Rankin Inlet, where the council now has a new staff member.

The kit offers a Nunavut-specific approach to grieving and loss, along with advice on dealing with the practical matters that arise when someone dies.