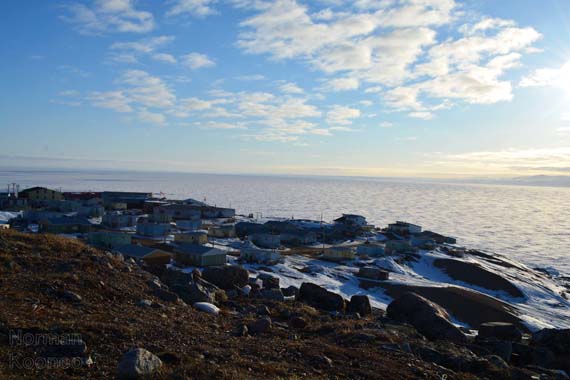 Just before midnight July 26, the RCMP reported that Killiktee surrendered to police, who took the man into custody. Charges have yet to be laid. (PHOTO BY N. KOONOO)

The 27-year-old was charged this week with two counts of uttering threats linked to incidents on July 26.

But Killiktee’s run-in with police appears to have begun days earlier: he was also charged this week with two counts of assault and one count of unlawfully causing bodily harm—those charges dating back to July 21 and 22, Nunavut RCMP said July 28.

Early July 26, RCMP sent out a call for help locating Killiktee, who police described as “armed and dangerous.” The RCMP said Killiktee had made threats to community members and local police officers.

As the police search advanced, RCMP vacated homes in the 700 block of the Baffin community, opening a safe accommodations space in the Pond Inlet community hall for those residents.

The RCMP flew in members from Iqaluit and its Critical Incident Team to help with the operation. By early evening, the RCMP reported that officers had made contact with Killiktee, who was barricaded inside a home.

Hours later, just before midnight, the RCMP reported that Killiktee had surrendered to police, who took the man into custody.

No one was injured in the altercation.

“A peaceful ending to these unpredictable situations like these are the desired outcome we all want for all parties involved,” RCMP said in a later July 26 release.

“The RCMP would like to thank the residents of Pond Inlet for their assistance and patience during this incident.”

Killiktee has been remanded and will appear in Iqaluit in Nunavut Court of Justice Aug. 1.