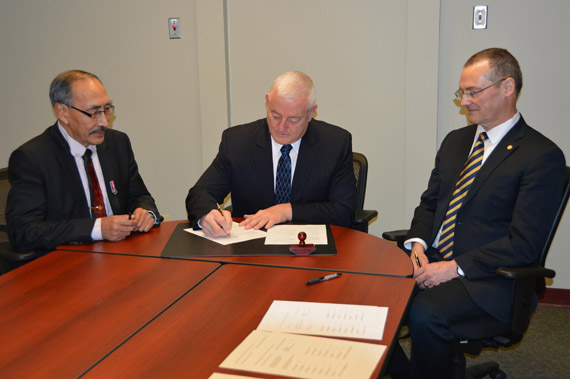 Terry Young, president of the Nunavut Teachers’ Association, signs the teachers’ new collective agreement with the territorial government, in the company of Paul Quassa, left, minister of education, and Keith Peterson, Nunavut’s minister of finance. (PHOTO FROM GOVERNMENT OF NUNAVUT)

The Nunavut Teachers’ Association signed a new collective agreement with the territorial government May 29 that immediately increases teachers’ wages by three percent.

The four-year agreement, valid from July 2013, will provide additional two per cent increase to wages in July 2015 and one per cent for each of the two following years.

“We’ve looked at agreements throughout the country, and ours is a very good deal,” NTA president Terry Young told Nunatsiaq News.

“Over 95 per cent of the teachers accepted it.”

“A lot of work and co-operation between both parties has gone into finalizing the agreement and we are satisfied with the outcome,” Keith Peterson, minister of finance, said in a news release.

The new contract will cost the government an extra $16.9 million, according to Chris D’Arcy, deputy minister of finance.

“That’s our estimate,” D’Arcy said, May 30. “We’re fairly confident about the estimate because we know what the staffing complement normally is in schools.”

The money will come from a $38 million contingency fund set aside in the government’s proposed budget for 2014-15, which was just released May 26.

“We allowed for an additional contingency for the NTA negotiations,” D’Arcy said. “We’ll appropriate it to the department (of education) in the fall.”

“I am very pleased to have reached a deal that is fair to both parties,” said the NTA’s Young. “This will allow an opportunity to move forward with other issues that are important to teachers and students in Nunavut.”

The agreement also increases allowable “special leave days,” which cover paid leave for family reasons, to a maximum 30 days over a teacher’s career — up from 25.

The teachers’ association and the Government of Nunavut also jointly agreed to continue their shared support for the safe schools anti-violence committee.

“Our teachers are the first point of contact to ensuring our students receive quality education and the government values their contribution to enhancing our education system,” Paul Quassa, minister of education, stated in the release.

D’Arcy said the government is satisfied with how the agreement was reached.

“We’re pleased with the outcome,” he said. “The negotiations were always good and well-intentioned.”

The agreement expires in July 2017.