Nunavut teachers gather in Iqaluit to share and learn

“Many of our teachers have amazing skill sets” 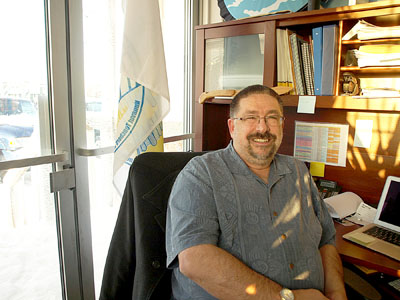 Robin Langill, president of the Nunavut Teachers Association, seen here at his office in Iqaluit, is welcoming about 600 teachers to the Iqaluit this week for a week-long conference. (DEAN MORRISON)

Teachers from across Nunavut flocked into Iqaluit Feb.13 to talk shop and share experiences with one another at the week-long Piliriqatigiinniq Teacher’s Conference.

More than 600 educators from across the territory are expected to participate in the conference, which has closed schools Nunavut-wide for the next five days.

“Every year teachers have five professional development days built into the school calendar, usually in a block,” Robin Langill, president of the Nunavut Teacher’s Association said. “This year we coordinated it across the territory so that the conference could go ahead.”

This is only the second time such a conference has been held since the creation of Nunavut in 1999. The last similar gathering was held in 2005.

For Iqaluit, it means all of its hotels are filled to capacity, with 247 rooms booked for the conference, Langill said, noting that “teachers will be doubling up in the rooms and billets have also been arranged for the overflow.”

Most conference events and workshops will take place at Inuksuk High School.

Arranging a conference of this scale was not an easy task, with many NTA staff working some mornings until 4 a.m., Langill said.

But the opportunity to get educators together from across the territory is vital to building a strong supportive educational network, Langil said.

“If you work in one town or region for your whole career, you might think that it is the same everywhere and it is not,” Langill said. “If you are a Grade 3 teacher in Whale Cove you don’t have another Grade 3 teacher to talk to.”

The conference allows teachers to build relationships that they can take back to their home communities, Langill said.

They’ll also hear from David Suzuki, academic, CBC broadcaster and environmental activist, who is scheduled to give a keynote speech Feb.14 called “The Challenges of the 21st Century: Setting the Real Bottom Line.”

“I have seen the changes in the environment since moving up north in 1986,” Langill said. “I remember Halloween always being the start of the cold -35 weather and not letting up until March. Now we are seeing that weather not coming until January and being done in February.”

And, on Feb. 16, Premier Eva Aariak, who is also the education minister and a former teacher, will participate in a panel workshop called “Stories of Education in Nunavut.”

Many of the teachers’ workshops are aimed at the challenges and experiences of teaching in Nunavut, while other workshops are similar to what would be offered at teacher’s conferences elsewhere in Canada.

And others will see teachers learning yoga or how to make sealskin mittens.

“Many of our teachers have amazing skill sets and there are many teachers from Nunavut that will be presenting workshops”, Langill said.