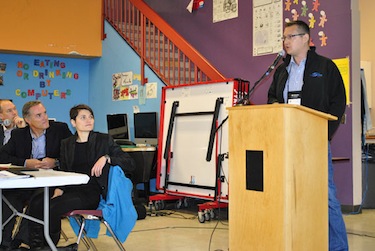 Mark Walker of Northwestel, Paul Bush of Telesat and Oana Spinu of the Nunavut Broadband Development Corp. listen to Jeff Phillips of the SSI Group give a presentation on the morning of Sept. 27 at the Nunavut Trade Show in Iqaluit. Despite their business rivalries and philosophical differences, all players agree that there’s an urgent need for governments to develop new policies and a new financial framework for broadband telecommunications in northern Canada. (PHOTO BY JIM BELL)

They may not agree on much, but there’s one issue on which all of Nunavut’s telecom players agree: governments must soon develop new ways of supporting broadband internet in Arctic Canada, a conference session held Sept. 27 at the Nunavut Trade Show revealed.

The gathering brought together a collection of mostly private firms whose clashing commercial interests often bring them into conflict.

But all groups admitted that governments, especially the federal government, must act now to replace a subsidy system that expires in 2016 and to recognize the technological landscape has changed radically over the past decade.

And they also said the CRTC, Canada’s telecommunications regulator, must change the terms of a special fund that is now used to subsidize the cost of landline telephone service in remote communities.

It’s also clear that to fix the widening communications gap between the North and southern Canada, governments must choose from a complex menu of commercial pitches.

“The time is now for Arctic Fibre,” said Doug Cunningham, of Arctic Fibre Inc., an Ontario company that plans to build an undersea fibre optic cable from London to Tokyo under the waters of the Canadian Arctic.

Cunningham said hundreds of millions of telecom consumers in Asia would ultimately pay for his undersea cable, eliminating the need for government subsidies to build it.

But, in response to questions, he said that connecting all or most communities in Labrador, Nunavik and Nunavut to the marine cable would likely require government spending of between $174 million and $190 million over about 20 years.

At the same time, he said his proposed route would automatically connect 52 per cent of Nunavut’s population to his firm’s fibre optic cable, supplying them with fast, cheap connections that eliminate the latency delays and high annual transmission costs that bedevil satellite-based systems.

With government spending, including money to pay for a spur line to hook up Kivalliq communities on the west coast of Hudson Bay, 92 per cent of Nunavut’s population could be connected to Arctic Fibre’s cable, Cunningham said.

This would not kill satellite communications, but it would relegate satellite to a backup role if fibre lines are damaged, Cunningham said.

“I’m not suggesting that you throw out your satellite dishes — it will be a backup,” he said.

But in Nunavut, Arctic Fibre’s big satellite rival, Telesat launched a big pitch of its own this past February.

Under it, Telesat would spend $30 million over 10 years to make three more satellite transponders available to the North and another $10 million to finance upgrades to ground equipment, said Paul Bush, the company’s vice president of business development

At the same time, Bush said Telesat wants government to spend $120 million over 10 years on another 12 transponders (a transponder is a spot on a satellite that supplies a fixed unit of bandwidth).

In his remarks, Bush slammed the Arctic Fibre plan, saying fibre cuts are far too common, that ice conditions near shorelines could damage fibre cables and that implementation of Cunningham’s plan might take too much time.

And he downplayed the Oct. 6, 2011 satellite meltdown across the North by say satellite-based services are “99.999 per cent reliable.”

Cunningham responded by saying fibre cables can be protected by laying them in covered trenches and by doing horizontal drilling near shorelines.

And he said most cuts to fibre optic lines occur in land-based systems, not marine cables.

“A little ice is nice,” Cunningham said, because ice-covered seas reduce the chance of undersea cables getting damaged by ship anchors or bottom-trawling fishing vessels.

Another objection to Arctic Fibre — which Telesat takes full advantage of in its pitch to government — is that an undersea cable cannot reach every single Nunavut community.

Oana Spinu of the Nunavut Broadband Development Corp. said her group believes all communities, no matter how small or isolated, must each gain access to the same level of broadband connectivity.

In the same vein, Bush said only Telesat satellites are capable of delivering the same service to all communities, because satellite signals are accessible everywhere.

Cunningham dismissed the parity notion as “utopian” saying that if more communities were to gain access to inexpensive fibre optic connections, the resulting savings could pay for faster satellite services in communities the cable can’t reach.

He also pointed out that rural communities on the outskirts of Ottawa still rely on antiquated dial-up internet.

However, Jeff Phillips of the SSI Group, which runs the NBDC’s Qiniq network, said “broadband for all” should be the governing principle for telecommunications development.

“Paul and I have got you covered,” Phillips said.

And Phillips said that within the system his company manages for Qiniq, SSI Micro has trained customer agents in every community, which meets another NBDC goal: building local capacity.

But, depending on what the CRTC later decides, SSI Micro may have to compete with another “broadband for all” proposal.

Their rival, Northwestel, is proposing that the CRTC approve a $273 million service improvement plan that would offer high speed internet to all 96 communities in its service area, as well as 3G cell phone service.

“We are asking the CRTC to step out and be bold,” Walker said.

Another entity that’s under pressure to step up is Industry Canada, whose subsidy system for northern broadband expires in 2016.