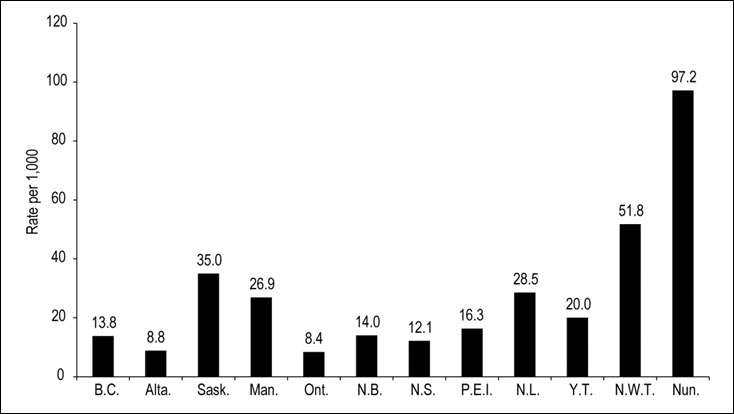 This graph from the Canadian Institute for Health Information shows the rate of day surgery for cavities by location of residence, selected provinces and territories for children age one to younger than five over a two-year period from 2010 to 2012. 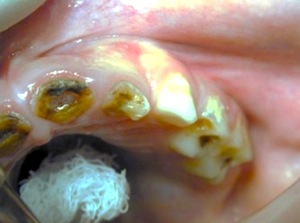 This shows how bad some young children’s teeth can look before surgery. (PHOTO COURTESY OF THE CIHI)

It’s not pleasant for a young child to suffer from painful cavities or to be put to sleep for dental surgery.

But if you’re the parent of a child under the age of five in Nunavut, your child is more than 10 times more likely than a child of a similar age in Ontario to require surgery for the treatment of cavities and severe tooth decay.

More Nunavut preschoolers are undergoing dental surgery under general anesthetic than anywhere else in Canada because their baby teeth are rotten, says a new report from the Canadian Institute for Health Information.

Each year roughly 19,000 young children in Canada have dental surgery, the recently-released report says — and more than 500 of them come from Nunavut.

The condition of these children’s teeth is so severe, they need general anesthesia for an average of 82 minutes while teeth are pulled and repaired.

Among the other findings of the Treatment of Preventable Dental Cavities in Preschoolers: A Focus on Day Surgery Under General Anesthesia:rates for dental day surgery were close to nine times as high for children from neighbourhoods with high (versus low) Aboriginal populations.

These day surgery operations are also costly, $21.2 million each year across Canada, excluding Quebec, which did not participate in the study.

But, as the report notes, this amounts represents “a fraction of the true cost because it does not include the costs of care providers, such as dentists and anesthesiologists, or travel.”

This level of decay in early childhood, called “early childhood caries” is considered to be an infectious disease resulting in decay of a child’s primary or baby teeth.

The disease, also known as Baby Bottle Tooth Decay, is associated with frequent consumption of juice, milk, formula or soda, which cling to an infant’s teeth for long periods.

It begins with the transmission of bacteria to the child, usually from a primary caretaker, who may also have untreated dental disease.

“Consequences of ECC can be dire,” the report says.

These can include pain, difficulty eating and sleeping, speech difficulties and poor self-esteem which can affect growth and also impact on “the ability to concentrate and function.

“The quality of life can be seriously impaired, the report says.

Doctors and dentists recommend that babies’ and toddlers’ teeth and gums be cleaned after every feeding or meal, starting from when their first teeth appear.

ITK called for action on Inuit oral health in 2013 because, overall, tooth decay is two to three times worse among Inuit than among the general Canadian population.

Other recommended actions included putting health promotion within the education curriculum for all ages and promoting oral health as a part of overall good health — as is already done in Nunavik where children regularly brush their teeth at child care centres and schools.