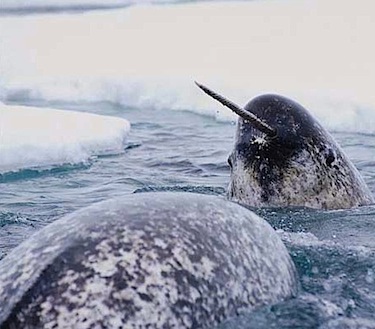 The Nunavut Wildlife Management Board hearing on the proposed narwhal management plan takes place in Iqaluit from July 24 to 26. (FILE PHOTO)

The NWMB hearing takes place in Iqaluit from July 24 to 26, a June 25 NTI news release said.

The DFO developed the management plan in consultation with NTI, regional wildlife organizations and Hunter and Trappers Organizations.

It’s an “attempt to establish a total allowable harvest for narwhal that respects Inuit harvesting rights while promoting the sustainable harvesting and trade of narwhal,” said NTI.

The plan proposes a total allowable harvest based on summering stocks, a two-tag system for some communities, and new reporting requirements for hunters.

Two representatives from the regional wildlife organizations and one elder from Nunavut’s three regions will be invited to attend the hearing in Iqaluit.

The DFO finalized the draft plan and presented it for approval to the NWMB after conducting consultations with Inuit last March.

The NWMB will now review the draft plan, seeking input and comments.

If the plan is accepted, the DFO minister can establish a total allowable harvest and have the new plan in place by March 2013, when the Committee on International Trade of Endangered Species meets in Thailand, and before the narwhal hunt gets under way.

That hunt has been governed by quotas since 1996, but now, the DFO wants to see Nunavut hunters adopt a new more regulated system for narwhal harvesting.

This would change how quotas are distributed and impose new measures designed to keep track of every animal and every tusk harvested.

That new approach is spelled out in the densely-worded, 43-page “Integrated Fisheries Management Plan” for narwhal in Nunavut that would come into effect in January 2013.

The plan divides Nunavut into six new management units based on where biologists believe narwhals spend the summer. It increases the total narwhal harvest for Nunavut to 1,180, up from a figure of 704 in previous years.

The DFO based its total allowable catch on the number of narwhal in the management units.

In northern Hudson Bay, the DFO estimates there are 5,023 narwhals. But for Somerset Island, Admiralty Inlet, Eclipse Sound and East Baffin Island, they estimate a narwhal population of about 90,000.

Along with the new quotas, the DFO also wants more stringent reporting of hunts — now self-reported to HTOs — as well as a “tusk certification program” to improve “tusk traceability.”

This will see marine mammal tags on tusks, inspections and certification by a wildlife officer or fishery officer and “possession of untagged tusks” becoming “illegal.”

It will also require permits to take tusks out of Nunavut.

“Improved controls over tusks are critical to protect the legal market and trade, from the hunter to the end buyer,” the management plan says.

The pressure is on the DFO to put a narwhal management plan in place, because Canada needs to show the world it’s managing narwhal effectively.

At the CITES meeting, Canada must show that allowing the export of an Appendix II species is not detrimental or harmful to the survival of the species for narwhal exports to continue.

Narwhal have been listed since 1979 on Appendix II of the CITES agreement.