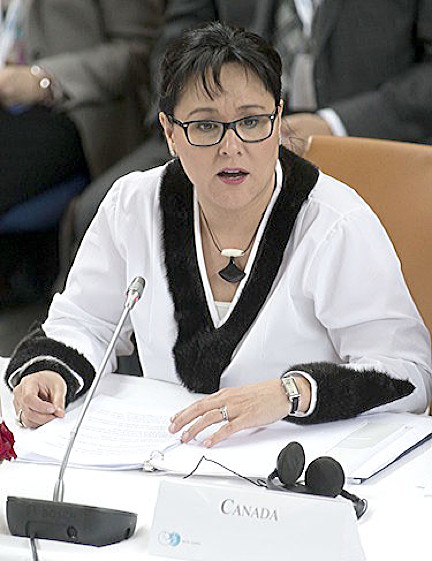 The Comprehensive Economic and Trade Agreement, called CETA, between Canada and Europe is the biggest trade agreement Canada’s been a part of since the North American Free Trade Agreement came into force in 1994.

Prime Minister Stephen Harper signed an agreement-in-principle for the deal this past Oct. 18 with Jose Manual Barroso, the president of the European Commission.

“Overall, the Canada-EU trade agreement is the biggest deal Canada has ever made,” Leona Aglukkaq told Nunatsiaq News.

And that spells more opportunities in the North, Aglukkaq said.

“In Nunavut, as we increase trade, we will look at the fishing industry, for example, Baffin fishing regions. Or the mining industry, so for Nunavut the elimination on tariffs on metal and mining products will increase sales,” Aglukkaq said.

That means “more jobs, high wages, [and] duty free fish from Nunavut to Europe,” she said.

Before, exports from Canada to Europe faced tarriffs of 25 per cent in many cases.

CETA will get rid of 96 per cent of those tariffs when it comes into force, and 100 per cent within seven years.

“Ninety-six per cent today is fantastic news to what we had before,” Aglukkaq said. “We didn’t have this market and it’s great news again for the fishing industry,” Aglukkaq said.

“The EU is by far the world’s biggest importer of fish and seafood and Nunavut will now be better positioned to access that market,” she said.

The government says CETA will affect the mining industry in a big way, too.

According to a government document called “How CETA Will Benefit Nunavut,” Canada exported $1.2 million in metal and mineral products from 2010 to 2012.

After CETA is ratified, foreign companies would be allowed majority owners of uranium mining projects in Canada. Previously, they had to find a Canadian partner to do business with willing to assume at least 51 per cent of ownership.

This would help French-owned Areva Resources Canada Inc. which wants to open a uranium mine called Kiggavik, located 80 kilometres west of Baker Lake.

The Uranium Investing News is calling it a “new day” for uranium because of CETA.

“In terms of the rules themselves, they’re quite clear and any investor would have to apply by the rules,” Aglukkaq said.

She said under the agreement, “we’ve outlined more predictable rules for investors. And again, this will translate to more investments for Nunavut, creating jobs, long-term prosperity.”

“Through that circumpolar business forum we’re trying to open the doors to the Arctic on a number of areas whether it be country food trade or tourism or innovative technology, energy,” Aglukkaq said.