A stop sign stands near the Road to Nowhere neighbourhood in Iqaluit where many residents live in apartments and condos. An Iqaluit woman has started a petition to ban smoking indoors in multi-dwelling buildings such as these. (PHOTO BY JANE GEORGE) 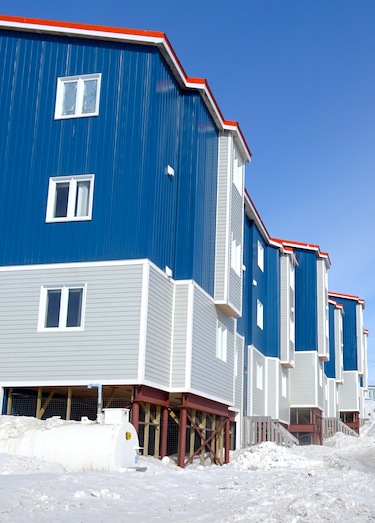 If you live in a multi-dwelling building like this one in Iqaluit, you may be able to smell second-hand smoke from your neighbours if they smoke inside. (PHOTO BY JANE GEORGE)

Sharon Angnakak is looking for 1,000 Nunavummiut willing to support a territory-wide ban on indoor smoking in multi-dwelling buildings.

Last week the Iqaluit woman launched an online petition drive to gain support from 1,000 people in Nunavut for this goal: a ban on all smoking inside multi-dwelling buildings.

“If you have children or not and live in an apartment building, condo, row house where your neighbours smoke inside their unit, you will know how awful it is to have to smell and live beside the toxicity of second-hand smoke,” Angnakak wrote on the Iqaluit Public Service Facebook site.

“No one should have to live beside this toxicity. We take other chemicals seriously, let’s take this one seriously! It kills.”

Angnakak, community wellness coordinator at Nunavut Tunngavik Inc., hopes to get 1,000 people to support the petition, which she is also circulating in a paper version.

She said she also plans on sending it to the Nunavut legislative assembly for consideration during its fall sitting.

“I live in an apartment building where my neighbours smoke inside their units. Despite the rental company taking measures to help me by weatherproofing the door and blocking the ventilation, as well as cleaning my ventilation unit, the smoke continues to enter my apartment where myself and my two young children live,” Angnakak told Nunatsiaq News.

Nunavut has the highest rate of smoking in Canada and many people in Nunavut have become sick or have died prematurely as a result of tobacco use.

But second-hand smoke, which is what smokers breathe out or the smoke from a burning cigarette, also kills non-smokers and causes diseases such as lung disease, heart disease, heart attacks and stroke.

“I did research on the affects of second-hand smoke, and it is clear that it is not safe, no amount is safe,” Angnakak said. “Second-hand smoke causes diseases and death in non-smokers, and I consider my health and my children’s health in danger because our neighbours won’t take their habit outside.”

The Canadian Cancer Society website cites studies which show that even low levels of second-hand smoke exposure can be harmful because it contains hundreds of toxic chemicals — more than 70 of these cause cancer.

Second-hand smoke can make you congested and cause you to cough. It can also irritate your skin, eyes, nose and throat.

And second-hand smoke can make allergies or breathing problems, such as asthma, worse, the Canadian Cancer Society says.

Children are also at greater risk of getting sick from second-hand smoke than adults.

The Pauktuutit national Inuit women’s association Atii program on second-hand smoke says to “always smoke outside, if the children are old enough to be left alone.”

But Pauktuutit also says if smoking outside is not possible, you should try to pick one room as a “smoking room” and blow cigarette smoke outdoors, through a window.

“Put a fan behind you to make sure the smoke goes out the window; and make the smoking room not quite so comfy so you will not want to spend a lot of time there,” a Pauktuutit handout says.

But Angnakak’s petition wants Nunavut to go much further than Pauktuutit, by placing a total ban on all indoor smoking in every multi-dwelling building in Nunavut.

She’s looking for volunteers from other Nunavut regions to help get signatures for the petition. If you’re interested, you can contact Angnakak at shangnakak@gmail.com

You can find her petition here.