Nunavut women prepare to take their first steps of hope 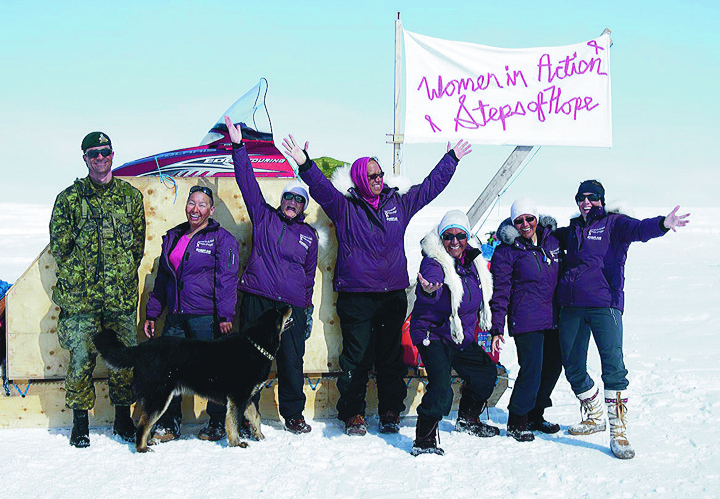 Veronica Tattuinee-Connelly couldn’t commit to the 200-kilometre trek, but she’s decided to become part of Women in Action anyway.

She recently organized a loonie-toonie sale that brought in $2,100, along with other donations she drew from businesses and organizations in her hometown of Rankin Inlet.

Tattuinee has been busy drumming up support for this year’s Women in Action — Steps of Hope walk, which will see four Nunavut women travel by foot from Rankin Inlet to Whale Cove and back.

The walk aims to raise money — and awareness — for breast cancer, by raising funds for the Alberta Cancer Foundation.

“I was diagnosed with cancer in 2007,” said Tattuinee-Connelly, now in remission and recently married. “I was affected by it, so I want to give back.”

So far, their efforts have raised almost $30,000, with the goal of reaching $80,000 by the time the group reaches the finish line.

Tattuinee-Connelly will be at the walk’s starting line April 30, when Kim Crockatt of Cambridge Bay, Wynter Kuliktana of Kugluktuk, Jesse Mike of Iqaluit and Susan Ball of Arviat set off on the 100-km hike to Whale Cove.

The original group of 10 participants has shrunk in recent weeks due to health and personal issues, including the withdrawal of Nunavut commission Edna Elias, the walk’s coordinator.

Elias wrote a public letter about her withdrawal from the event following a diagnosis of a lung disease that causes extreme shortness of breath.

“But I’m still very much a part of this,” said an upbeat Elias, who intends to be at the walk’s start. “I plan to start with the group and walk about a mile, and then join them again at the finish line.”

Elias said the group is making final preparations and selecting guides to accompany the group and map the trail.

Based on the group’s success in the 2012 Women in Action walk from Bay Chimo to Cambridge Bay, Elias estimates that it will take the group four days to reach Whale Cove, and roughly another four to return to Rankin Inlet.

That means the women will walk about 25 km a day, equipped with GPS and SPOT tracking devices so the public can follow their movements.

In Elias’ absence, the four women walking this spring are all new to Steps of Hope, but each is involved for the same reason.

“I think it’s safe to say they’ve either had a personal battle with cancer or lost a family member to cancer,” Elias said.

Elias lost her sister to breast cancer about five years ago.

Crockatt, executive director of Ilitaqsiniq (Nunavut Literacy Council), was diagnosed with a very aggressive form of breast cancer in January 2010.

She underwent a year and a half of surgery, radiation and chemotherapy in Edmonton and is still undergoing reconstructive surgeries.

Ball, who recently retired from the Department of Education in Arviat, said she’s feels privileged to take part.

“Nothing on this walk will compare to the anguish, suffering and hope that accompany a diagnosis of cancer,” she wrote on the group’s website.

“I will be sustained during the walk by memories of those who died too soon and I will be inspired by those who survived a most difficult battle. I walk in hope for a cure.”

That’s because most of the donations came in after the group set off on its inaugural walk in 2012, which finished with $92,000.

“It’s all about contributing to cancer research towards a cure,” Elias said.

“It’s also to raise awareness that our health is in our own hands,” she added. “As much as we can, there many ways to avoid the risks of getting cancer, from keeping active and watching the food we eat.”

You can learn more about the Women in Action — Steps of Hope 2014 or make a donation here.