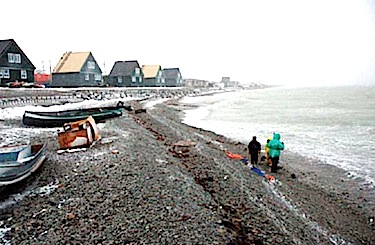 This is how the community of Hall Beach now looks. (FILE IMAGE)

A longstanding debt to four men who took on the gruesome job of relocating graves in Hall Beach still haunts the Nunavut legislature: hunters who relocated 20 graves in 1968 should receive some compensation, Amittuq Louis Tapardjuk said Oct. 26.

“Their qamutiit were completely inundated with human blood. Their clothing had lingering smells of death,” said Tapardjuk, who had asked the Government of Nunavut to reopen the file last March.

In 2000, Enoki Irqittuq of Hall Beach, then the MLA for Amittuq, described how the men had used their dog teams to move the graves for local officials who wanted to use the land for housing.

Irqittuq, who raised the issue in the legislature several times in 1999, 2000 and 2001, said “some of the graves belonged to family members.”

“The people who dug up the graves had a very hard time because they were digging up graves that were very old and some were recent adult graves and children’s graves. The old coffins, when they were dug up, had children that had been wrapped in newspapers or cardboard. They had disintegrated to the point where they fell apart when you dug them up. That was especially with the children’s graves.”

When the settlement council asked these men to do this unpleasant task, they were told they would be given a “substantial” amount of money.

But they never received payment, Irquittuq said. They wished to receive $5,000 each, the mayor of Hall Beach told Nunatsiaq News in 2001.

That demand for compensation continues from Tapardjuk and the current mayor of Hall Beach, Paul Hauli, who wrote Nunavut health minister Keith Peterson earlier this month asking the GN to give the people involved a “dignified and fair settlement.”

“The Municipality of Hall Beach and I have urged the Government of Nunavut to resolve this issue once and for all by providing a one-time compensation payment,” said Taparduk, who tabled more correspondence on the issue in the Nunavut legislature earlier in the week.

The suggestion that the GN pay comes after John Duncan, the minister of Aboriginal Affairs and Northern Development, told Peterson in a Sept. 5 letter that Ottawa “holds no liability and should not be considered the responsible party in this matter.”

But Taparduk said he still wants to see compensation for the men who went through a “very hard and stressful time.”

“The men who were tasked to move the human remains were told that the cemetery was too close to the community and abutting the proposed lots, so they had no choice but to move the remains,” he said.

Even to this day, they are still waiting for payment, Tapardjuk said, adding that only one is still living.

Peterson said, after reviewing the correspondence, the health department would offer mental health support — but no compensation.

“What I’m prepared to do is offer the individuals and the community of Hall Beach counseling and support to these individuals affected and help them with their grieving and healing process,” he said.

Ottawa says there was no clear evidence linking the federal government to the event, Peterson said.