“It’s a story of love and respect, regardless of ethnicity” 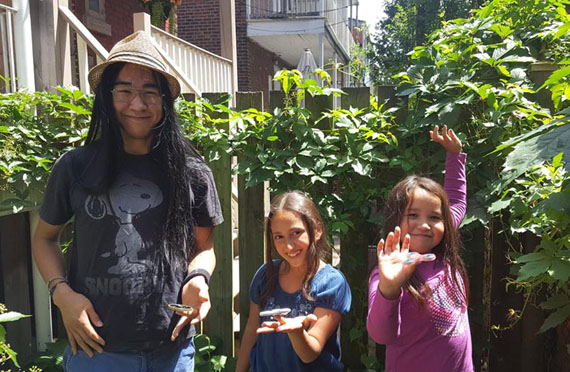 Tia and Piujuq’s young cast includes (from left) Alexandre Apak Cousineau, 16, Tia Bshara, 10 and Nuvvija Tulugarjuk, 10. The three are pictured here playing with fidget spinners while on a break from their Montreal shoot last month. (PHOTO BY S. COHN-COUSINEAU/ARNAIT) 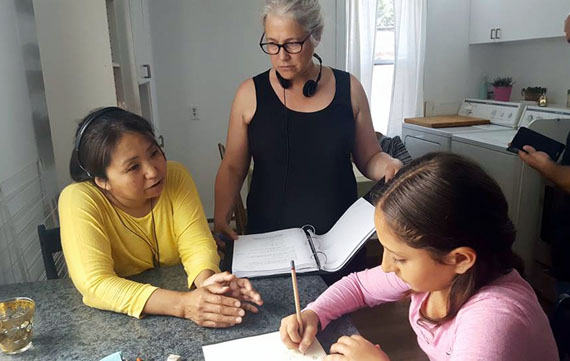 Director Lucy Tulugarjuk and Marie-Hélène Cousineau chat with actress Tia Bshara on the set of the film shoot for Tia and Piujuq in Montreal last month. (PHOTO BY S. COHN-COUSINEAU/ARNAIT)

The Igloolik-based production company just wrapped its first two weeks of filming in Montreal for the new film, Tia and Piujuq.

The story follows Tia, a 10-year-old Syrian girl whose family has just emigrated to Montreal. Tia is homesick and lonely, until she befriends Piujuq, an Inuk girl who introduces the girl to Inuit myth and magic.

The script was written by Marie-Hélène Cousineau, Samuel Cohn-Cousineau and Lucy Tulugarjuk, who is also directing the film.

With Arnait’s third production, Tulugarjuk said she and her fellow filmmakers were looking to explore a new cultural bond.

In 2016 alone, Canada welcomed almost 50,000 new Syrian refugees into the country, though the majority of them have settled in southern cities.

“We wanted to have this Nunavummiut girl welcome a Syrian girl to Nunavut,” Tulugarjuk said.

“They become close friends and [Piujuq’s] grandmother teaches them about Inuit traditions and legends,” she explained. “It’s a story of love and respect, regardless of ethnicity.”

Tia is played by Syrian actress Tia Bshara and Piujuq by Tulugarjuk’s daughter, Nuvvija Tulugarjuk, both 10 years old. The cast is a combination of professional and amateur actors, Syrian and Inuit.

Tia and Piujuq is filmed in four languages: Inuktitut, French, English and Arabic.

Tulugarjuk said she’s found a number of similarities between Inuit and Syrian cultures and people. Both have faced oppression and are largely misunderstood in mainstream media, she said.

“Family connection is also very strong in both Inuit and Syrian culture,” she said.

Tulugarjuk is zig-zagging the country this summer to bring the production together.

The Igloolik-raised actress and filmmaker—who rose to fame for her role of Puja in the 2001 film Atanarjuat—took a two-month leave from her job as a community justice co-ordinator in Fort Smith, Northwest Territories to film Tia and Piujaq.

The Arnait crew just wrapped two weeks of filming Montreal, before relocating to Igloolik, where they’ll shoot for another eight to 10 days.

Arnait hopes to release the film in mid-2018.

You can see more images from the filming of Tia and Piujuq at Arnait’s Facebook page.