Two of the ice carvings made April 14 stand outside the RCMP V Division building where the competition took place. (PHOTO BY JANE GEORGE) 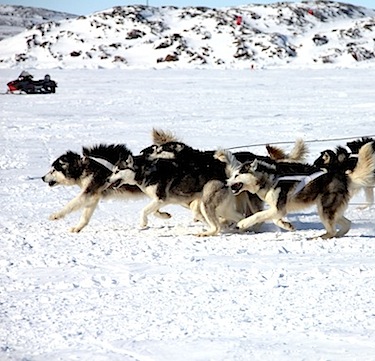 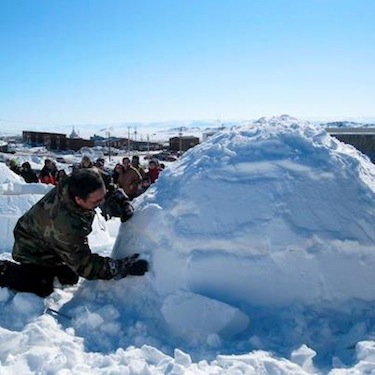 Joe Netser puts the finishing touches on his igloo April 13 during the igloo-building contest, part of Toonik Tyme’s annual events. Netser completed his snow house in just 35 minutes, beating more than six others to win the contest. “Some years ago I also won, when I was a young man,” said Netser, originally of Coral Harbour, who now lives in Iqaluit. Asked how tough this year’s competition was, he said “you don’t really look at the others, you just do your best on your own.” Netser won an airplane ticket with Canadian North for his effort. (PHOTO BY PETER VARGA)

Drum-dancing, throat-singing, a bit of gospel and blues, hip-hop moves, humour and a few speeches: that’s what the annual Toonik Tyme opening celebrations delivered April 12 at the Iqaluit curling rink.

Entertainment for the audience of about 400 included youth break dancers, the Inuksuk high school choir’s drum dancers and throat singers, rapper Hyper T, and Esther Powell and the Roughcuts, a blues and gospel band from Rankin Inlet.

After welcoming the audience to Toonik Tyme, Iqaluit Mayor John Graham said that “spring in Iqaluit just wouldn’t be the same” without Toonik Tyme. the spring festival that comes after a long, cold winter — even if so far this year, many days’ temperatures broke long-standing records.

Toonik Tyme started in 1965 as a way to attract tourists north and give the community an event to promote Iqaluit as a tourist destination. That goal is still a work in progress.

But even as Toonik Tyme has evolved to include hockey, the “Iqaluit Idol” competition and other events, the festival continues to highlight traditional Inuit activities, such as tea and bannock-making, seal-skinning, games and igloo-making as well as family-oriented events.

The opening ceremonies, hosted by Audrey Lemieux, who works for the Government of Nunavut, and Thomas Anguti Johnston, otherwise known as “Inuk Qablunaaq” from the popular “Qanurli” television show, included throat singing from the Inuksuk choir.

They sang a song about “being happy in this land” and a song from Nunavut’s award-winning feature film, Atanarjuat: The Fast Runner.

But Esther Powell of the Roughcuts didn’t steer away from tough subjects: she told the crowd that “anytime you feel lost, you’ve got to talk to someone.”

Powell said she has witnessed a lot of pain and suicide in Rankin Inlet.

The four-member band also sang an original song about suicide, written and performed in Inuktitut.

The 2013 honorary Toonik, or Tuniq, Laakkuluk Williamson Bathory, did not attend the opening event.

Williamson Bathory, a Greenlandic mask dancer who has performed during previous Toonik Tyme celebrations, was at the Banff Centre for the Performing Arts, fine-tuning “Tulugaq: Inuit Raven Stories,” which will be presented May 4 in Ottawa as part of the Northern Scene events.

April 13 brought more activities, including the igloo-building contest, won by Joe Netser, while April 14 saw four dog teams heading off down the bay.

Some other highlights of Toonik Tyme include a “Snowmobile Uphill Climb” behind the Arctic Winter Games arena at 6 p.m. on April 18 ( $100 entry fee).

That same day, there’ll be a feast, fashion show and performance by the Iqaluit band, the Jerry Cans, at the curling rink from 6 p.m. to 9 p.m.

A seal-skinning contest takes place April 20, at Nakasuk elementary school, starting at 12 p.m., and snowmobile drag races are also scheduled for April 20, on the sea ice at 1 p.m.

The “big band” night, April 20 at the curling rink, features award-winning Holly McNarland and the Trade-offs, starting at 8 p.m. Tickets are $40 at Arctic Ventures Martketplace or the door.