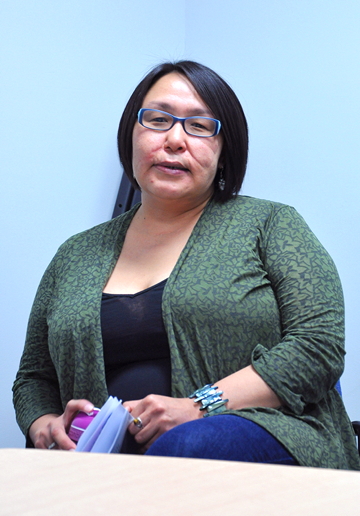 Romani Makkik, chair of Iqaluit’s community justice committee, sits for an interview in Iqaluit’s yellow Inuksugait building, where the committee will soon begin meeting. Iqaluit’s justice committee has been on hiatus since 2012 but the Government of Nunavut expects it to be operational again within about a month. (PHOTO BY THOMAS ROHNER)

The Government of Nunavut has breathed new life into restorative justice efforts in Iqaluit by resurrecting its community justice committee.

And that’s good news for everyone in the territory’s capital, those behind the local committee told Nunatsiaq News.

That’s because the committee will allow community members to collectively address, and heal from, the impacts of crime.

“Crimes concern a whole community and that’s why I’m part of the committee — because I feel that personal responsibility,” said Romani Makkik, who will chair Iqaluit’s committee.

“I grew up in Igloolik, where I’d like to think I’m a prime example of that saying, ‘it takes a community to raise a child.’ Everybody in town had a part in the person I’ve become,” Makkik added during a July 14 interview.

“And that’s grounded in Inuit societal values, which this committee is very much grounded in.”

Iqaluit- Niaqunnguu MLA Pat Angnakak has been a vocal supporter of restorative justice measures to divert offenders from what she called Nunavut’s “inadequate” corrections system June 1 in the territorial legislature.

The outspoken MLA said the revival of Iqaluit’s justice committee is welcome news.

“I think it’s very good news, and a long time coming… Justice committees provide a really important contribution to justice in Nunavut. If we can send some of those people who’ve broken the law to the justice committees instead of through court, all the better,” Angnakak said July 14.

The Iqaluit Alluriarvik justice committee — which means in English “a place to step forward to” — will work alongside elders to incorporate three main Inuit social values, Makkik said: respect for others; serving family and community; and working together for a common cause.

Both the RCMP and Nunavut’s Crown prosecution office can refer those accused of a summary crime to the committee, explained Lisa Tootoo, a community justice specialist with the GN.

Summary crimes are generally less serious crimes than indictable offences such as homicide, sexual assault and crimes against children.

If the accused admits to the crime, and is willing, his or her case will be dealt with by two facilitators and one or two elders on the local justice committee, Makkik said.

Unlike the court system, the community justice model is a collaborative process, Tootoo said, because it brings victims, if they so choose, and others impacted by a crime, together with community members to talk about how it affected their lives.

“Offenders have a direct say in what they can do to make things right, and are involved with coming up with an agreement. It’s a safe place for them to discharge some of that shame that comes with offending and allows them to be a part of the solution.”

The agreement will be unique to each case, Tootoo said, and could include things like community volunteer work, financial restitution or hunting on the land for those impacted by the offence.

In the court system, by contrast, lawyers speak on behalf of accused offenders and the judge hands out a sentence if the accused is found guilty, Tootoo said.

The Government of the Northwest Territories established justice committees in Nunavut in 1993, Tootoo said, but Iqaluit has been without its local committee since 2012 when the contribution agreement with the GN ended.

That’s largely due to the GN’s difficulty in attracting Iqalungmiut to volunteer their time to sit on the committees, Tootoo said.

The GN usually enters contribution agreements with municipal governments to cover the administration of local justice committees, but in Iqaluit the GN oversees the committee directly, she added.

The work local justice committees do, however, is important because it reduces the likelihood of offenders committing future crimes, Tootoo said.

“Many offenders have in some way been victims of crime or abuse or something traumatic,” which creates a sense of victimization in the offenders, Tootoo said.

That sense of unrecognized victimization can lead someone to commit further crimes, she added.

By allowing offenders to be involved in a collaborative process, Tootoo said offenders can have their needs as victims met.

“It reduces the chances of that sense of victimization moving on to offending again,” she said.

As a former employee of the GN justice and corrections departments for three years in different jobs, Makkik said she saw firsthand the limited resources available to help offenders get the rehabilitation and help they need.

“That’s why I decided to jump at this opportunity with the justice committee, because it’s a way of trying to help not just the offender but the community as a whole,” Makkik said.

Makkik explained that a small committee, including three elders, has already been trained, and is awaiting a final referral agreement to be signed with the RCMP and the Crown’s office.

But Tootoo said she expects the agreement to be signed by the end of July, after which the committee can begin work.

If you are interested in becoming a member of the Iqaluit justice committee, you can contact Iqaluit’s justice committee outreach worker, Samantha Giroux, at 867-975-6362 or sgiroux@gov.nu.ca, the news release said.