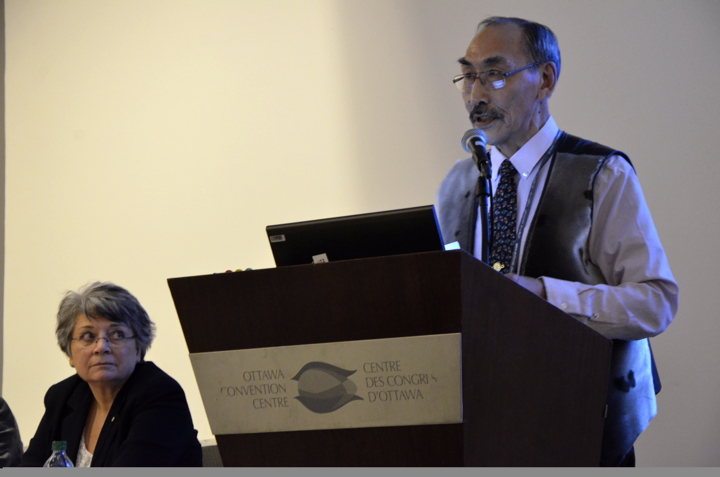 Nunavut’s education minister, Paul Quassa, speaks to an audience of academics, policy-makers and northerners about a university for Inuit Nunangat with fellow panel member, Mary Simon, to his right. (PHOTO BY DAVID MURPHY)

OTTAWA — A panel of northern education experts spoke passionately about the need for a Canadian Arctic university before a packed room at the ArcticNet conference Dec. 9.

Last April, Agnico Eagle donated $5 million to a future university in Nunavut, but not much has happened since that announcement, except for deciding that the institution should have an Inuit focus.

Mary Simon, a past president of Inuit Tapiriit Kanatami, told the crowd that she had spoken to Nunavut’s education minister Paul Quassa about the university being a “non-ethnic university,” but with a strong emphasis on Inuit culture and language.

“We agreed that it would be Inuit Nunangat [university], not just Nunavut, but Inuit Nunangat. The whole Arctic region where Inuit live,” Simon said.

But that could mean a location outside of Nunavut.

“There’s a number of different models out there. I don’t think anybody’s picked a particular path or anything,” Ma said.

The panel discussion was part of the four-day Arctic Change conference, hosted by ArcticNet, which unfolded Dec. 8 to Dec. 12 at the Ottawa Conference Centre.

Quassa stressed Nunavummiut, and Inuit, are ready to go “beyond a virtual university.”

“A physical location will need to be identified,” Quassa said.

“It needs to be a place where it is accessible, that supports a student, an academic population, have other physical infrastructure to attract researchers and have a vibrancy that contributes to academic and research excellence,” he said.

The next step would be to form a committee and identify someone to head the project. But there’s no word yet on when that might happen.

“We will need people — whether through a committee, or some other structure, to lead the preparatory work to establish an Arctic university,” Quassa told the crowd.

“I do not think this work can be done off the corner of someone else’s desk. We would need to identify people who are dedicated to this important responsibility,” he said.

Quassa then seemed to hedge a bit on when, or if, the university would actually open.

He said Northerners would need to be “realistic” and “patient,” but ended his speech with hope that a university might come sooner, rather than later.

“I think there is a genuine interest by many parties to make this vision into a reality, and in a relatively short period of time,” he said.

The president of the virtual University of the Arctic, Lars Kullerud, agreed, saying “It only takes a stroke of a pen.”

Kullerud described historic success stories of Arctic universities that popped up quickly, such as Saami University College in Norway and the University of Lapland in Finland.

And in the Faroe Islands — population 50,000 — Kullerud said people just “wrote down the papers, and decided, ‘we have a university.’”

“That was the beginning of that university. It was a will, more than a big legal story. It is possible to take the authority to just decide,” Kullerud said.

But Ma said the stroke-of-a-pen analogy is a little far-fetched.

“Yeah you can do that, but what have you really got, right?” Ma said. “I think we need to do this in a measured approach.”

Ideally, a university would come in time for Canada’s 150th anniversary, in 2017, the senior research officer at the Nunavut Research Institute Mary-Ellen Thomas told Nunatsiaq News.

“To me that would be a legacy the government could make. And what better timing?” Thomas said.

“I don’t think it will take that long. I think there are players out there that would put some money behind it,” Thomas said.

The panel agreed Ottawa would need to fork over a lot of the cash, but third party funding is needed as well.

“There needs to be a mix of funding,” Simon said.

“A lot of the big universities in southern Canada, when someone is a multi-millionaire and dies, they bequest their money to the university that they’ve always supported. And we’ve never looked at those kinds of things.”

Whatever the scenario, Simon said creating a university from scratch won’t be easy.

“We know this will probably be a struggle. But Inuit know what struggle is. We have done struggle,” she said.