The candidate’s more important than the party, Anawak says 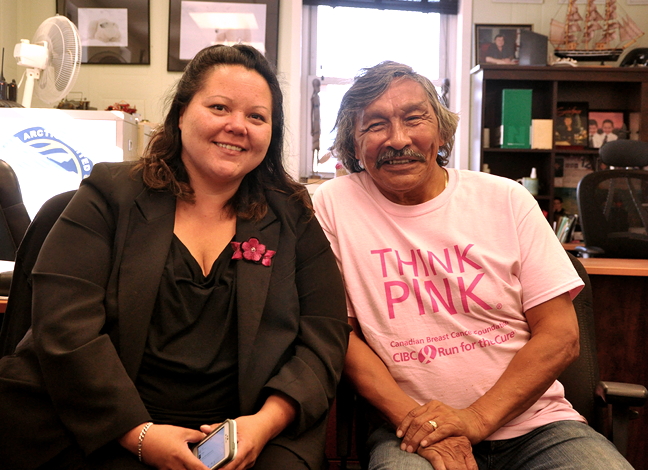 Anawak told Nunatsiaq News recently his jump to the NDP is “no big deal.” “I don’t think the majority of Nunavummiut are so concerned with what party, but what commitment, knowledge, and what feelings the candidates have for the territory.” Anawak also said the Liberal party’s decision to choose a non-Inuktitut speaker as a Nunavut candidate — Hunter Tootoo — is “disappointing.”

I know Ottawa inside and out, but I also know Nunavut inside and out, having lived in Nunavut all my life and having grown up in a hunting and gathering society and moving on to today where technology has taken over.

First of all there’s a severe shortage of housing. I was in Naujaat earlier this spring, where in one house I visited there were 18 people living in a four-bedroom house.

The NDP has already said they would look at affordable housing and housing for the homeless. Homelessness isn’t just people who have to go to a men’s shelter, it’s also people who can’t call a house a home because they’re just boarding at their relatives.

Being a hunter myself, most communities need a small craft harbour. I think that’s another area we’d have to look at in order to respond to the needs of our growing population. Other than in Pangnirtung, there’s no small craft harbours anywhere in Nunavut.

The other area we might take a good look at infrastructure is day care facilities, that’s a major problem. An NDP government would take a look at $15-a-day daycare.

The [Conservative] government came along to say we’re going to have seismic testing in Davis Strait. Nobody went up to Clyde River to say, ‘oh, can you let us know what you think?’ That’s not the kind of development we want.

What we have to start doing is thinking outside the box. Just because it’s been done this way for so long, doesn’t mean it’s the right way. Let’s look around the world where other countries have had a severe housing shortage, and how did they respond to it?

5. How would you and your party address poverty and job creation Nunavut?

Poverty is a real thing up here. There are people who can hardly afford to feed their family. A good example is a young mother or couple who may be unemployed or on income assistance and, because of problems with providing breast milk, have to buy formula but can’t afford it. And formula is the next best thing after breast milk.

There’s something wrong with the whole Nutrition North system. Why isn’t it responding to the very basic needs of a baby needing formula? The NDP just put forward a motion in June wanting to do a comprehensive review of the Nutrition North program.

The potential for job growth is in the developments occurring up here, whether it’s mining, oil and gas exploration or other forms of development.

Also, we’re very dependent on fossil fuels up here. Is there an innovative way of having something outside of fossil fuels?

When the [Truth and Reconciliation Commission’s] report came out, the NDP leader quite clearly said we would follow and put in place all of the recommendations, which would respond to a lot of the trauma up here. I have been an advocate for doing something about mental health in Nunavut for a long time now, over 30 years. I’ve lost three brothers over those 40 years, and a number of other relatives, to suicide, and have seen them suffer under the trauma of alcohol and drug abuse.

I think the first thing we need is more mental health facilities in Nunavut, utilizing our own people. For too long we’ve been under the government, having to use social workers who did not have any clear understanding of Inuit culture. Let’s have treatment facilities up here that are geared towards people who are from up here.