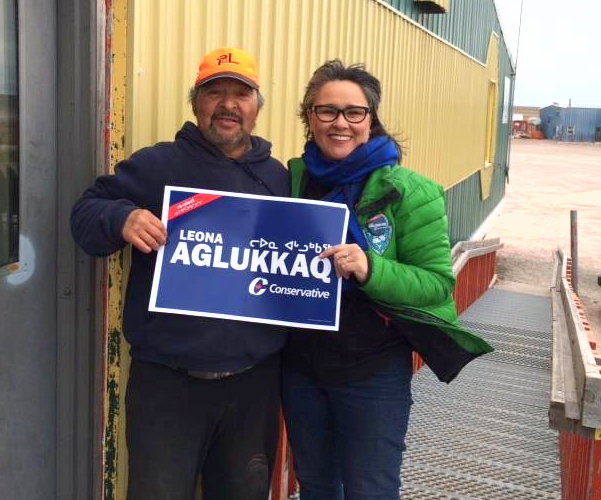 Here’s the first of three candidate profiles: Leona Aglukkaq of the Conservative Party of Canada.

Aglukkaq, the incumbent MP, told Nunatsiaq News she’s running on her record. She said no other party has done more in terms of investing in Nunavut and she pointed to the recent legal settlement with Nunavut Tunngavik Inc. on implementation of the Nunavut Land Claims Agreement as an example of her government’s commitment. Although her party is fighting to maintain ground in the polls, Aglukkaq said her constituents tend to vote for the person, not the party, and she’s confident they have faith in her leadership.

I’m running on my record for the last seven years of producing results for Nunavummiut. Since being elected in 2008, I have been working to ensure the needs of Nunavut were heard in Ottawa. I have worked to ensure the Prime Minister as well as my cabinet colleagues understood the realities of Nunavut and the unique challenges we face.

No other government in the history of Canada has made the North such a priority. This election is about leadership and I have been able to deliver to Nunavummiut and address some of the challenges we’ve been facing for some time.

Our government is providing the Government of Nunavut with a record level of funding for important programs such as health and education and we have made many strategic investments related to training in the mining industry, fishing industry, arts and crafts.

We’ve also put in place long-term stable funding for infrastructure by putting in place the Building Canada Fund of $419 million over 10 years.

From 1995 to 2006, the territorial government infrastructure budget was $55 million. Now it’s $419 million going forward to address the infrastructure gap. We’ve also established a P3 program that includes Inuit organizations. This was a direct result of consultation with Inuit leaders.

I’m sitting in my hotel room and looking at the new construction of the Taloyoak Health Centre. And I look down the street, it’s a brand new hamlet office building that our government has made investments in.

I’ve always been very clear around oil and gas development. Responsible resource development in the North, that’s what we say and that’s what our entire land claim agreement is about.

No project will go forward if it does not meet the standards. Decisions approving any project have to go through the rigorous environmental assessment boards which, for off-shore, is the National Energy Board.

No political party or individual make these decisions. The [NEB] or the Nunavut Impact Review Board does the evaluation of any project. And they do a fantastic job.

If a project does not meet the bar of moving forward, then it shouldn’t move forward. The onus is on the sector to make sure their projects are environmentally sound.

Every community’s needs are different, but we are addressing some of those infrastructure gaps. Social housing is another one that we have put a lot of money into in the North. This is an ongoing area that needs attention.

The federal government, since we formed government, I believe, has spent about $600 million just in social housing, affordable housing and homelessness partnership programs with the territorial government.

I appreciate that the Government of Nunavut and the former housing minister had issues delivering more housing to Nunavut, but our government has remained committed in supporting the territorial government.

5. How would you and your party address poverty and job creation in Nunavut?

We have made strategic investments in training Nunavummiut. We created the first ever northern adult basic education program where about $22 million was allocated to train Nunavummiut in skills training in sectors like mining, for example.

We’ve made strategic investment related to the mining sector so that Kivallirmiut, for instance, can participate in job opportunities with Agnico Eagle and over 200 people are participating in the workforce in that region, for example.

We’ve also made strategic investments in the emerging sector based on our decision to increase the turbot allocation off the coast of Baffin Island. Our government delivered on a request after many years of being asked. We’ve seen over 1,000 people participate in the training program so that Inuit can participate in the $70 to $80 million industry that we helped build in our communities.

Our government has also supported the Nunavut Sivuniksavut board of directors in purchasing a bigger facility in Ottawa so that they can take in more Nunavut students into the NS program. [Aglukkaq’s staff later said her government gave NS $2.5 million.]

We all know that mental health is a very serious issue and that no one government or organization can tackle it alone. In Nunavut, unfortunately, everyone knows someone who has been affected by mental health or suicide.

I had recently announced with the minister of health from Nunavut, funding of more than $32 million over the next three years to access services in Nunavut, which also includes a mental health component.

We’ve also invested in projects to keep our youth active and away from abusing drugs or alcohol. This was done through the national anti-drug strategy.

During my time as chair of the Arctic Council, I had also championed the issue of making mental health a priority in the Arctic region.

I visit the schools and I talk to our young people to stay in school. It’s important to take the opportunities before you. In my view, it’s so important to get a good education.

We have to take a balanced approach to make sure that with education, that we also look at what opportunities are out there for jobs, to make sure our young people have the training and skills they need to participate in the work economy.

It’s also very important to support our young people staying connected to their culture and to their language. Our roots are who we are as people so the programs we put forward support the hunting, Junior Rangers learning land skills, as an example, as well as providing support to our artists.